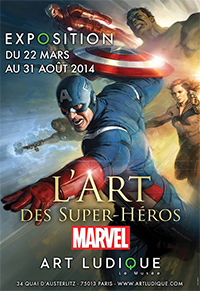 Press Release:
The Avengers, Iron Man, Captain America, Thor, Hulk, Spider-Man, Daredevil, Fantastic Four, Dr. Strange – their names resound like legends. Their costumes and their emblems are recognized the world over, and their stories occupy a fundamental place in our imaginations and in the culture of our time.

This exceptional exhibition will present a panorama of the world of Marvel, from the historic plates of the original comic books to the concept drawings and illustrations made for the very latest cinema productions.

The visit will also include videos* with commentaries by the legendary creator Stan Lee about the origin of the characters, his influences and inspirations, as well as commentaries by artists such as Joann Sfar, Zep and Olivier Coipel.

For the first time ever, the public will be invited to a spectacular retrospective to explore and admire more than 100 original Marvel art and sketches, in the publications which brought about these iconic characters.

The exhibition will feature works by the one and only Jack Kirby, who, together with the writer Joe Simon, developed Captain America, and later, with Stan Lee, the Fantastic Four, the Avengers, Thor, the Hulk and the X-Men.

A focus on the Marvel Studios, which produced such film franchises as Marvel’s The Avengers, Marvel’s Iron Man, Marvel’s Thor and Marvel’s Captain America, will create a contemporary artistic path through more than 200 artworks created to adapt the Super Heroes to the cinema. Concept art, storyboards and even vehicle and accessory designs will show admiring visitors the fabulous preproduction paintings used to prepare films, created by Marvel artists including Adi Granov and Marvel’s Heads of Visual Development Charlie Wen and Ryan Meinerding. At this exhibition visitors will be able to see a number of preparatory works for Captain America: The Winter Soldier, released in France on March 26.

Meinerding is also the author of the painting created especially for the “Art of the Marvel Super Heroes” exhibition poster.

The “Art of the Marvel Super Heroes” exhibition is also significant in that it will show visitors real props used in film shootings, next to their concept drawings. We will be able to admire Iron Man’s actual helmet, Thor’s hammer, Iron Patriot’s armor, Captain America’s shield and a Hydra motorcycle.

The “Art of the Marvel Super Heroes” exhibition, imagined and designed by Art Ludique-Le Musée is a world first. It pays tribute to these huge artists who, just like their characters, have acquired a “super power”: the ability to draw masterpieces.

To the Art Ludique Homepage