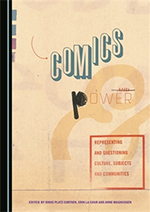 Comics and Power
Representing and Questioning Culture, Subjects and Communities

Rikke Platz Cortsen, Erin La Cour und Anne Magnussen (Hg.)
Cambridge Scholars Publising
355 Seiten
ISBN: 978-1-4438-7086-3
~£ 52.99
Februar 2015
Verlagsseite
Many introductions to comics scholarship books begin with an anecdote recounting the author’s childhood experiences reading comics, thereby testifying to the power of comics to engage and impact youth, but comics and power are intertwined in a numbers of ways that go beyond concern for children’s reading habits. Comics and Power presents very different methods of studying the complex and diverse relationship between comics and power. Divided into three sections, its 14 chapters discuss how comics interact with, reproduce, and/or challenge existing power structures – from the comics medium and its institutions to discourses about art, subjectivity, identity, and communities. The contributors and their work, as such, represent a new generation of comics research that combines the study of comics as a unique art form with a focus on the ways in which comics – like any other medium – participate in shaping the societies of which they are part. 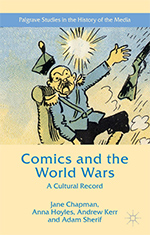 Comics and the World Wars
A Cultural Record

Jane L. Chapman et al. (Hg.)
Palgrave MacMillan
240 Seiten
ISBN 978-1-1372-7371-0
~£ 60,00
Juli 2015
Verlagsseite
Comics and the World Wars argues for the use of comics as a primary source by offering a highly original argument that such examples produced during the World Wars act as a cultural record. Recuperating currently unknown or neglected strips, this work demonstrates how these can be used for the study of both world wars. Representing the fruits of over five years team research, this book reveals how sequential illustrated narratives used humour as a coping mechanism and a way to criticise authority, promoted certain forms of behaviour and discouraged others, represented a deliberately inclusive educational strategy for reading wartime content, and became a barometer for contemporary popular thinking. 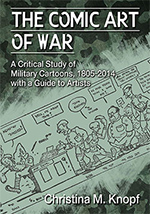 Christina M. Knopf
McFarland
252 Seiten
ISBN 978-0-7864-9835-2
~€ 39,95
Juli 2015
Verlagsseite
For military cartoonists the absurdity of war inspires a laugh-or-cry response and provides an endless source of un-funny amusement. Cartoons by hundreds of artists-at-arms from more than a dozen countries and spanning two centuries are included in this study—the first to consider such a broad range of military comics. War and military life are examined through the inside jokes of the men and women who served. The author analyzes themes of culture, hierarchy, enemies and allies, geography, sexuality, combat, and civilian relations and describes how comics function within a community. A number of artists included were known for their work with Disney, Marvel Comics, the New Yorker and Madison Avenue but many lesser known artists are recognized. 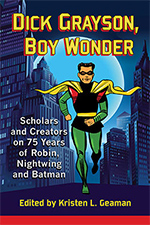 Kristen L. Geaman (Hg.)
McFarland
360 Seiten
ISBN 978-0-7864-9788-1
~$ 39,95
Juli 2015
Verlagsseite
The first scholarly work to focus exclusively on the Boy Wonder, this collection of new essays features critical analysis, as well as interviews with some of the biggest names to study Dick Grayson, including Chuck Dixon, Devin Grayson and Marv Wolfman. The contributors discuss his vital place in the Batman saga, his growth and development into an independent hero, Nightwing, and the many storyline connections which put him at the center of the DC Universe. His character is explored in the contexts of feminism, trauma, friendship, and masculinity. 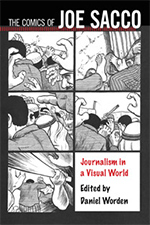 The Comics Of Joe Sacco
Journalism in a Visual World

Daniel Worden (Hg.)
UP of Mississippi
272 Seiten
ISBN 978-1-4968-0221-7
~$ 60,00
August 2015
Verlagsseite
irst in the new series Critical Approaches to Comics Artists, this edited volume explores Sacco’s comics journalism, and features established and emerging scholars from comics studies, cultural studies, geography, literary studies, political science, and communication studies. Sacco’s work has already found a place in some of the foundational scholarship in comics studies, and this book solidifies his role as one of the most important comics artists today. Sections focus on how Sacco’s comics journalism critiques and employs the „standard of objectivity“ in mainstream reporting, what aesthetic principles and approaches to lived experience can be found in his comics, how Sacco employs the space of the comics page to map history and war, and the ways that his comics function in the classroom and as human rights activism. The Comics of Joe Sacco offers definitive, exciting approaches to some of the most important–and necessary–comics today, by one of the most acclaimed journalist-artists of our time. 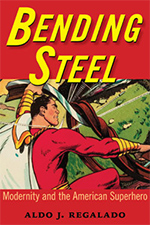 Aldo J. Regalado
UP of Mississippi
288 Seiten
ISBN 978-1-6284-6221-0
~$ 60,00
August 2015
Verlagsseite
Bending Steel examines the historical origins and cultural significance of Superman and his fellow American crusaders. Cultural historian Aldo J. Regalado asserts that the superhero seems a direct response to modernity, often fighting the interrelated processes of industrialization, urbanization, immigration, and capitalism that transformed the United States from the early nineteenth century to the present. Reeling from these exciting but rapid and destabilizing forces, Americans turned to heroic fiction as a means of explaining national and personal identities to themselves and to the world. In so doing, they created characters and stories that sometimes affirmed, but other times subverted conventional notions of race, class, gender, and nationalism.