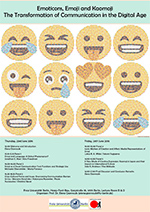 Veranstaltertext:
„The „Face with Tears of Joy“-emoji was chosen as the Oxford Dictionaries Word of the Year 2015 with the argument that emoji have the potential to overcome language barriers. For some, that’s a reason to celebrate, for others a sign of decay or loss of the importance of language.

Emoji 絵文字 („picture/image character“) are considered to be a further development of emoticons and were invented in the late 1990s by Shigetaka Kurita, who had worked for DoCoMo on the i-mode Project. The term „emoticon“ is composed of „emotion“ and „icon“ and can be understood as a pictorial representation of a facial expression used in Instant Messaging (IM), chats, emails, social networking services (SNS), SMS or blogs. The most commonly used emoticons, smileys, have been an integral part of digital communication for a few years. If smileys are composed of several punctuation characters, they are usually rotated ninety degrees, thus becoming lying images of faces. In Instant Messenger, certain strings of characters produce a certain graphic of a smiley. Meanwhile, there exist also animated emoticons which tell stories and represent scenes, or stickers as emoticons that are a kind of merchandise item. In interaction with a text, emoticons intensify, neutralize or weaken the content and interpret it, for example, in terms of irony; they give the text a certain „tone.“

Forerunners of emoticons, so-called stick-figure faces that were made up of punctuation marks and letters have been in existence since the second half of the nineteenth century. Although they were a marginal phenomenon, they have been used to humorously explain texts by adding a nuance through nonverbal communication. In 1963 there was a kind of rediscovery and transformation of the stick figure faces, as the U.S.-American commercial artist Harvey Ball designed the „smiley.“

While emoticons in written digital communication primarily express mood or emotional states such as joy, sadness, anger, satisfaction or anxiety, emoji as graphic symbols/ideograms not only express emotions, but also refer to animals, food, plants, sports, clothes, transport, or weather. Furthermore, they represent interpersonal relationships and (social) contexts. A special Japanese form of emoji, in which there are no limits to creativity, is called kaomoji 顔文字 („facial character“). While the image of „conventional“ Western emoticons is rotated ninety degrees, this is usually not the case with kaomoji. Since they not only consist of characters of American Standard Code for Information Interchange (ASCII), but also of the second Japanese syllabary „Katakana,“ they expand the forms of expression of the Western system of signs.

Japanese mobile phones have saved dozens of emoji for text messages. After entering a relevant keyword, users are able to decide whether they would like to enter an emoji instead of a Chinese character (Kanji), that is to say, whether to convert a word to a Kanji or an emoji. Some of the emoji are used and understood in Western contexts as well, while others are difficult to understand without previous knowledge. Therefore there seem to be both universally comprehensible and culturally coded emoji.

In the meantime, emoji have not only come to play a role in digital communication on the computer, cell phone or IPad, but they have now found their way into literature, manga, and art. Furthermore a blog called “Narratives in Emoji” offers stories and movie plots in emoji shorthand. Moreover, emoji have become a big commercial business.

Although emoticons, emoji and kaomoji are a new complex system of signs in the digital world and beyond, and although they have revolutionized our communication and the relationship between text and image and can even be considered as a new language, research has paid little attention to them so far. “Emoji” as a field of research could be of relevance to cultural studies, affective theory, sociology and linguistics but also to communication studies or literary studies.“

Marta Fanasca (The University of Manchester)
“Impact taisetsu da!” The Use of Emoji and Kaomoji in dansō’s Blogs

Emoticons – Lingua Franca of the Young Generation or a Culture Specific Product Leading to
Misunderstandings?

Risa Matsuda (University of Tsukuba).
Construction of Iconicity in Scenes of Kaomoji