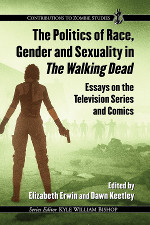 The Politics of Race, Gender and Sexuality in The Walking Dead: Essays on the Television Series and Comics

„From the beginning, both Robert Kirkman’s comics and AMC’s series of The Walking Dead have brought controversy in their presentations of race, gender and sexuality. Critics and fans have contended that the show’s identity politics have veered toward the decidedly conservative, offering up traditional understandings of masculinity, femininity, heterosexuality, racial hierarchy and white supremacy.
This collection of new essays explores the complicated nature of relationships among the story’s survivors. In the end, characters demonstrate often-surprising shifts that consistently comment on identity politics. Whether agreeing or disagreeing with critics, these essays offer a rich view of how gender, race, class and sexuality intersect in complex new ways in the TV series and comics.“ 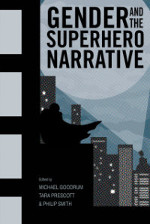 Gender and the Superhero Narrative

„The explosive popularity of San Diego’s Comic-Con, Star Wars: The Force Awakens and Rogue One, and Netflix’s Jessica Jones and Luke Cage all signal the tidal change in superhero narratives and mainstreaming of what were once considered niche interests.
Yet just as these areas have become more openly inclusive to an audience beyond heterosexual white men, there has also been an intense backlash, most famously in 2015’s Gamergate controversy, when the tension between feminist bloggers, misogynistic gamers, and internet journalists came to a head. The place for gender in superhero narratives now represents a sort of battleground, with important changes in the industry at stake. These seismic shift s–both in the creation of superhero media and in their critical and reader reception–need reassessment not only of the role of women in comics, but also of how American society conceives of masculinity.
Gender and the Superhero Narrative launches ten essays that explore the point where social justice meets the Justice League. Ranging from comics such as Ms. Marvel, Batwoman: Elegy, and Bitch Planet to video games, Netflix, and cosplay, this volume builds a platform for important voices in comics research, engaging with controversy and community to provide deeper insight and thus inspire change.“ 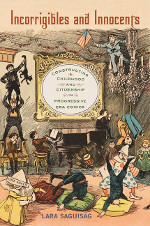 „Histories and criticism of comics note that comic strips published in the Progressive Era were dynamic spaces in which anxieties about race, ethnicity, class, and gender were expressed, perpetuated, and alleviated. The proliferation of comic strip children—white and nonwhite, middle-class and lower class, male and female—suggests that childhood was a subject that fascinated and preoccupied Americans at the turn of the century. Many of these strips, including R.F. Outcault’s Hogan’s Alley and Buster Brown, Rudolph Dirks’s The Katzenjammer Kids and Winsor McCay’s Little Nemo in Slumberland were headlined by child characters. Yet no major study has explored the significance of these verbal-visual representations of childhood. Incorrigibles and Innocents addresses this gap in scholarship, examining the ways childhood was depicted and theorized in late nineteenth- and early twentieth-century comic strips. Drawing from and building on histories and theories of childhood, comics, and Progressive Era conceptualizations of citizenship and nationhood, Lara Saguisag demonstrates that child characters in comic strips expressed and complicated contemporary notions of who had a right to claim membership in a modernizing, expanding nation.“ 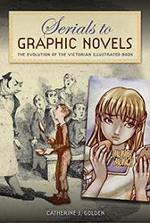 Serials to Graphic Novels: The Evolution of the Victorian Illustrated Book

„The Victorian illustrated book came into being, flourished, and evolved during the long nineteenth century. While existing scholarship on Victorian illustrators largely centers on the realist artists of the „Sixties,“ this volume examines the entire lifetime of the Victorian illustrated book. Catherine Golden offers a new framework for viewing the arc of this vibrant genre, arguing that it arose from and continually built on the creative vision of the caricature-style illustrators of the 1830s. She surveys the fluidity of illustration styles across serial installments, British and American periodicals, adult and children’s literature, and–more recently–graphic novels.
Serials to Graphic Novels examines widely recognized illustrated texts, such as The Pickwick Papers, Oliver Twist, Alice in Wonderland, Peter Rabbit, and Trilby. Golden explores factors that contributed to the early popularity of the illustrated book—the growth of commodity culture, a rise in literacy, new printing technologies—and that ultimately created a mass market for illustrated fiction.
Golden identifies present-day visual adaptations of the works of Austen, Dickens, and Trollope as well as original Neo-Victorian graphic novels like The League of Extraordinary Gentlemen and Victorian-themed novels like Batman: Noël as the heirs to the Victorian illustrated book. With these adaptations and additions, the Victorian canon has been refashioned and repurposed visually for new generations of readers.“ 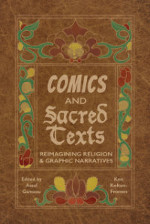 „Comics and Sacred Texts explores how comics and notions of the sacred interweave new modes of seeing and understanding the sacral. Comics and graphic narratives help readers see religion in the everyday and in depictions of God, in transfigured, heroic selves as much as in the lives of saints and the meters of holy languages. Coeditors Assaf Gamzou and Ken Koltun-Fromm reveal the graphic character of sacred narratives, imagining new vistas for both comics and religious texts.
In both visual and linguistic forms, graphic narratives reveal representational strategies to encounter the sacred in all its ambivalence. Through close readings and critical inquiry, these essays contemplate the intersections between religion and comics in ways that critically expand our ability to think about religious landscapes, rhetorical practices, pictorial representation, and the everyday experiences of the uncanny.
Organized into four sections–Seeing the Sacred in Comics; Reimagining Sacred Texts through Comics; Transfigured Comic Selves, Monsters, and the Body; and The Everyday Sacred in Comics–the essays explore comics and graphic novels ranging from Craig Thompson’s Habibi and Marvel’s X-Men and Captain America to graphic adaptions of religious texts such as 1 Samuel and the Gospel of Mark.“