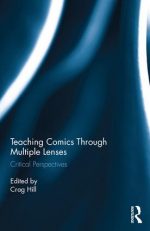 „Building off the argument that comics succeed as literature—rich, complex narratives filled with compelling characters interrogating the thought-provoking issues of our time—this book argues that comics are an expressive medium whose moves (structural and aesthetic) may be shared by literature, the visual arts, and film, but beyond this are a unique art form possessing qualities these other mediums do not. Drawing from a range of current comics scholarship demonstrating this point, this book explores the unique intelligence/s of comics and how they expand the ways readers engage with the world in ways different than prose, or film, or other visual arts. Written by teachers and scholars of comics for instructors, this book bridges research and pedagogy, providing instructors with models of critical readings around a variety of comics.“ 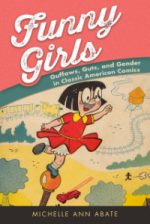 „For several generations, comics were regarded as a boy’s club — created by, for, and about men and boys. In the twenty-first century, however, comics have seen a rise of female creators, characters, and readers.
Throughout the first half of the twentieth century, the medium was enjoyed equally by both sexes, and girls were the protagonists of some of the earliest, most successful, and most influential comics. In Funny Girls: Guffaws, Guts, and Gender in Classic American Comics, Michelle Ann Abate examines the important but long-overlooked cadre of young female protagonists in US comics during the first half of the twentieth century. She treats characters ranging from Little Orphan Annie and Nancy to Little Lulu, Little Audrey of the Harvey Girls, and Li’l Tomboy — a group that collectively forms a tradition of funny girls in American comics.
Abate demonstrates the massive popularity these funny girls enjoyed, revealing their unexplored narrative richness, aesthetic complexity, and critical possibility. Much of the humor in these comics arose from questioning gender roles, challenging social manners, and defying the status quo. Further, they embodied powerful points of collection about both the construction and intersection of race, class, gender, and age, as well as popular perceptions about children, representations of girlhood, and changing attitudes regarding youth. Finally, but just as importantly, these strips shed light on another major phenomenon within comics: branding, licensing, and merchandising. Collectively, these comics did far more than provide amusement — they were serious agents for cultural commentary and sociopolitical change.“ 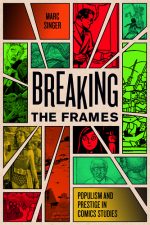 Breaking the Frames: Populism and Prestige in Comics Studies

„Comics studies has reached a crossroads. Graphic novels have never received more attention and legitimation from scholars, but new canons and new critical discourses have created tensions within a field built on the populist rhetoric of cultural studies. As a result, comics studies has begun to cleave into distinct camps — based primarily in cultural or literary studies — that attempt to dictate the boundaries of the discipline or else resist disciplinarity itself. The consequence is a growing disconnect in the ways that comics scholars talk to each other — or, more frequently, do not talk to each other or even acknowledge each other’s work.
Breaking the Frames: Populism and Prestige in Comics Studies surveys the current state of comics scholarship, interrogating its dominant schools, questioning their mutual estrangement, and challenging their propensity to champion the comics they study. Marc Singer advocates for greater disciplinary diversity and methodological rigor in comics studies, making the case for a field that can embrace more critical and oppositional perspectives. Working through extended readings of some of the most acclaimed comics creators — including Marjane Satrapi, Alan Moore, Kyle Baker, and Chris Ware — Singer demonstrates how comics studies can break out of the celebratory frameworks and restrictive canons that currently define the field to produce new scholarship that expands our understanding of comics and their critics.“ 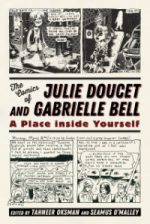 The Comics of Julie Doucet and Gabrielle Bell: A Place inside Yourself

„In a self-reflexive way, Julie Doucet’s and Gabrielle Bell’s comics defy easy categorization. In this volume, editors Tahneer Oksman and Seamus O’Malley regard Doucet’s and Bell’s art as actively feminist, not only because they offer women’s perspectives, but because they do so by provocatively bringing up the complicated, multivalent frameworks of such engagements. While each artist has a unique perspective, style, and worldview, the essays in this book investigate their shared investments in formal innovation and experimentation, and in playing with questions of the autobiographical, the fantastic, and the spaces in between.
Doucet is a Canadian underground cartoonist, known for her autobiographical works such as Dirty Plotte and My New York Diary. Meanwhile, Bell is a British American cartoonist best known for her intensely introspective semiautobiographical comics and graphic memoirs, such as the Lucky series and Cecil and Jordan in New York. By pairing Doucet alongside Bell, the book recognizes the significance of female networks, and the social and cultural connections, associations, and conditions that shape every work of art. “ 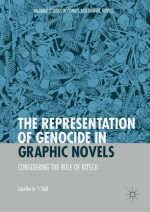 The Representation of Genocide in Graphic Novels: Considering the Role of Kitsch

„This book mobilises the concept of kitsch to investigate the tensions around the representation of genocide in international graphic novels that focus on the Holocaust and the genocides in Armenia, Rwanda, and Bosnia. In response to the predominantly negative readings of kitsch as meaningless or inappropriate, this book offers a fresh approach that considers how some of the kitsch strategies employed in these works facilitate an affective interaction with the genocide narrative. These productive strategies include the use of the visual metaphors of the animal and the doll figure and the explicit and excessive depictions of mass violence. The book also analyses where kitsch still produces problems as it critically examines depictions of perpetrators and the visual and verbal representations of sexual violence. Furthermore, it explores how graphic novels employ anti-kitsch strategies to avoid the dangers of excess in dealing with genocide. The Representation of Genocide in Graphic Novels will appeal to those working in comics-graphic novel studies, popular culture studies, and Holocaust and genocide studies.“