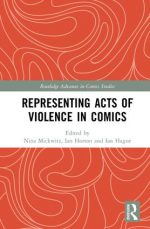 „Representing Acts of Violence in Comics raises questions about depiction and the act of showing violence, and discusses the ways in which individual moments of violence develop, and are both represented and embodied in comics and graphic novels. Contributors consider the impact of gendered and sexual violence, and examine the ways in which violent acts can be rendered palatable (for example through humour) but also how comics can represent trauma and long lasting repercussions for both perpetrators and victims.“ 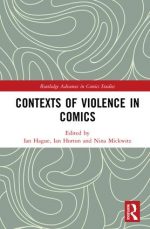 „Contexts of Violence in Comics asks the reader to consider the ways in which violence and its representations may be enabled or restricted by the contexts in which they take place. It analyzes how structures and organising principles, be they cultural, historical, legal, political or spatial, might encourage, demand or prevent violence. It deals with the issue of scale: violence in the context of war versus violence in the context of an individual murder, and provides insights into the context of war and peace, ethnic and identity-based violence, as well as examining issues of justice and memory.“ 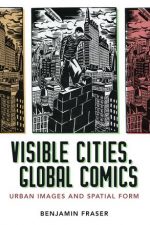 „More and more people are noticing links between urban geography and the spaces within the layout of panels on the comics page. Benjamin Fraser explores the representation of the city in a range of comics from across the globe. Comics address the city as an idea, a historical fact, a social construction, a material-built environment, a shared space forged from the collective imagination, or as a social arena navigated according to personal desire. Accordingly, Fraser brings insights from urban theory to bear on specific comics.
The works selected comprise a variety of international, alternative, and independent small-press comics artists, from engravings and early comics to single-panel work, graphic novels, manga, and trading cards, by artists such as Will Eisner, Tsutomu Nihei, Hariton Pushwagner, Julie Doucet, Frans Masereel, and Chris Ware.
In the first monograph on this subject, Fraser touches on many themes of modern urban life: activism, alienation, consumerism, flânerie, gentrification, the mystery story, science fiction, sexual orientation, and working-class labor. He leads readers to images of such cities as Barcelona, Buenos Aires, London, Lyon, Madrid, Montevideo, Montreal, New York, Oslo, Paris, São Paolo, and Tokyo.
Through close readings, each chapter introduces readers to specific comics artists and works and investigates a range of topics related to the medium’s spatial form, stylistic variation, and cultural prominence. Mainly, Fraser mixes interest in urbanism and architecture with the creative strategies that comics artists employ to bring their urban images to life.“ 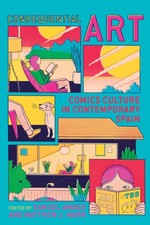 „Spanish comics have attracted considerable critical attention internationally: dissertations have been written, monographs have been published, and an array of cultural institutions in Spain (the media, publishing houses, bookstores, museums, and archives) have increasingly promoted the pleasures, pertinence, and power of graphic narrative to an ever-expanding readership – all in an area of cultural production that was held, until recently, to be the stuff of child’s play, the unenlightened, or the unsophisticated. This volume takes up the charge of examining how contemporary comics in Spain have confronted questions of cultural legitimacy through serious and timely engagement with diverse themes, forms, and approaches – a collective undertaking that, while keenly in step with transnational theoretical trends, foregrounds local, regional, and national dimensions particular to the late twentieth- and early twenty-first-century Spanish milieu. From memory and history to the economic and the political, and from the body and personal space to mental geography, the essays collected in Consequential Art account for several key ways in which a range of comics practitioners have deployed the image-text connection and alternative methods of seeing to interrogate some of the most significant cultural issues in Spain.“ 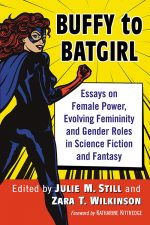 „Science fiction and fantasy are often thought of as stereotypically male genres, yet both have a long and celebrated history of female creators, characters, and fans. In particular, the science fiction and fantasy heroine is a recognized figure made popular in media such as Alien, The Terminator, and Buffy, The Vampire Slayer. Though imperfect, she is strong and definitely does not need to be saved by a man. This figure has had an undeniable influence on The Hunger Games, Divergent, Star Wars: The Force Awakens, and many other, more recent female-led book and movie franchises.
Despite their popularity, these fictional women have received inconsistent scholarly interest. This collection of new essays is intended to help fill a gap in the serious discussion of women and gender in science fiction and fantasy. The contributors are scholars, teachers, practicing writers, and other professionals in fields related to the genre. Critically examining the depiction of women and gender in science fiction and fantasy on both page and screen, they focus on characters who are as varied as they are interesting, and who range from vampire slayers to time travelers, witches, and spacefarers.“