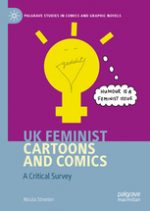 „This book demonstrates that since the 1970s, British feminist cartoons and comics have played an important part in the Women’s Movement in Britain. A key component of this has been humour. This aspect of feminist history in Britain has not previously been documented. The book questions why and how British feminists have used humour in comics form to present serious political messages. It also interrogates what the implications have been for the development of feminist cartoons and for the popularisation of feminism in Britain. The work responds to recent North American feminist comics scholarship that concentrates on North American autobiographical comics of trauma by women. This book highlights the relevance of humour and provides a comparative British perspective.
The time frame is 1970 to 2019, chosen as representative of a significant historical period for the development of feminist cartoon and comics activity and of feminist theory and practice. Research methods include archival data collection, complemented by interviews with selected cartoonists. Visual and textual analysis of specific examples draws on literature from humour theory, comics studies and feminist theory. Examples are also considered as responses to the economic, social and political contexts in which they were produced.“ 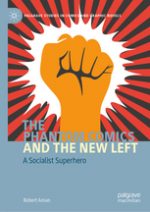 The Phantom Comics and the New Left: A Socialist Superhero

„This book is about the Phantom in Sweden, or, more correctly, about Sweden in the Phantom. Robert Aman uncovers how a peripheral American superhero – created in 1936 by Lee Falk – that has been accused of both racism and sexism has become a national concern in a country that several researchers have labelled the most antiracist and gender equal in the world. When a group of Swedish creators began their official production of licensed scripts based on The Phantomcomic in 1972, the character was redefined through the prism of New Left ideology. The plots of these comics, besides aiming to entertain, also sought to affirm for readers the righteousness and validity of an ideological doctrine that, at the time, was dominant among the Swedish public and influential in the country’s foreign policy. Ultimately, Aman demonstrates how the Swedish Phantom embodies values and a political point of view that reflect how Sweden sees itself and its role in the world.“

„More and more educators are using comics in the classroom. As such, this edited volume sets out the stakes, definitions, and exemplars of recent comics pedagogy, from K-12 contexts to higher education instruction to ongoing communities of scholars working outside of the academy.
Building upon interdisciplinary approaches to teaching comics and teaching with comics, this book brings together diverse voices to share key theories and research on comics pedagogy. By gathering scholars, creators, and educators across various fields and in K-12 as well as university settings, editors Susan E. Kirtley, Antero Garcia, and Peter E. Carlson significantly expand scholarship.
This valuable resource offers both critical pieces and engaging interviews with key comics professionals who reflect on their own teaching experience and on considerations of the benefits of creating comics in education. Included are interviews with acclaimed comics writers Lynda Barry, Brian Michael Bendis, Kelly Sue DeConnick, and David Walker, as well as essays spanning from studying the use of superhero comics in the classroom to the ways comics can enrich and empower young readers.
The inclusion of creators, scholars, and teachers leads to perspectives that make this volume unlike any other currently available. These voices echo the diverse needs of the many stakeholders invested in using comics in education today.“ 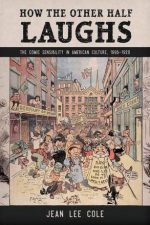 How the Other Half Laughs: The Comic Sensibility in American Culture, 1895-1920

„Taking up the role of laughter in society, How the Other Half Laughs: The Comic Sensibility in American Culture, 1895–1920 examines an era in which the US population was becoming increasingly multiethnic and multiracial. Comic artists and writers, hoping to create works that would appeal to a diverse audience, had to formulate a method for making the “other half” laugh. In magazine fiction, vaudeville, and the comic strip, the oppressive conditions of the poor and the marginalized were portrayed unflinchingly, yet with a distinctly comic sensibility that grew out of caricature and ethnic humor.
Author Jean Lee Cole analyzes Progressive Era popular culture, providing a critical angle to approach visual and literary humor about ethnicity—how avenues of comedy serve as expressions of solidarity, commiseration, and empowerment. Cole’s argument centers on the comic sensibility, which she defines as a performative act that fosters feelings of solidarity and community among the marginalized.
Cole stresses the connections between the worlds of art, journalism, and literature and the people who produced them—including George Herriman, R. F. Outcault, Rudolph Dirks, Jimmy Swinnerton, George Luks, and William Glackens—and traces the form’s emergence in the pages of Joseph Pulitzer’s New York World and William Randolph Hearst’s Journal-American and how it influenced popular fiction, illustration, and art. How the Other Half Laughs restores the newspaper comic strip to its rightful place as a transformative element of American culture at the turn into the twentieth century.“