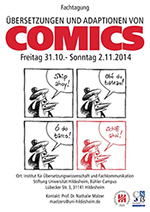 Disclaimer:
“Up to the present day translation studies have paid little attention to Comics. There are many possible reasons for this. Research within the discipline has for a long time almost exclusively focused on verbal texts. On one hand, since the 1990s it had devoted more attention to audio-visual texts, but a clear emphasis has been with those inter- and intra-lingual forms of translation which are required by films. On the other hand it is much harder to differentiate comics clearly from other text types, regardless of whether comics are seen as a genre, a distinct communication medium or as a hybrid collection of signs. Finally, comics have been regarded – especially in Germany – as unserious, and this undoubtedly has meant that they have been discussed in peripheral areas of literary criticism, media science and translation studies.

We intend in this conference to work with a broad concept of translation: one which embraces both inter-lingual and inter-semiotic aspects of translation. To translate comics from one language and culture into another almost invariably involves the adaptation of non-verbal and para-verbal elements. This is particularly evident both in the increasingly common practice of adapting comics across medium and across genre – as film, video game, radio play, stage play – and in the corresponding practice of adapting literary sources as comics, usually with the label Graphic Novel. In these processes, inter-lingual and inter-semiotic translation goes hand in hand with those adaptation processes which are a necessary part of changing medium or genre.”

Attendance at the conference is free. Please register though via email!
The Conference Program is now available in English
To the host’s page