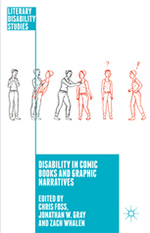 Chris Foss, Jonathan W. Gray and Zach Whalen (Hrsg.)
Palgrave MacMillan
216 pages
ISBN 978-1-137-50111-0
~$ 84,99
February 2016
Publisher’s page
As there has yet to be any substantial scrutiny of the complex confluences a more sustained dialogue between disability studies and comics studies might suggest, Disability in Comic Books and Graphic Narratives aims through its broad range of approaches and focus points to explore this exciting subject in productive and provocative ways. 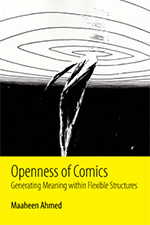 Maaheen Ahmed
University Press of Mississippi
224 pages
ISBN 978-1-49680-593-5
~$ 60,00
April 2016
Publisher’s page
Never before have comics seemed so popular or diversified, proliferating across a broad spectrum of genres, experimenting with a variety of techniques, and gaining recognition as a legitimate, rich form of art. Maaheen Ahmed examines this trend by taking up philosopher Umberto Eco’s notion of the open work of art, whereby the reader–or listener or viewer, as the case may be–is offered several possibilities of interpretation in a cohesive narrative and aesthetic structure. Ahmed delineates the visual, literary, and other medium-specific features used by comics to form open rather than closed works, methods by which comics generate or limit meaning as well as increase and structure the scope of reading into a work. 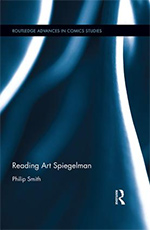 Philip Smith
Routledge
148 pages
ISBN 978-1-138956-76-6
~£ 90,90
February 2016
Publisher’s page
The horror of the Holocaust lies not only in its brutality but in its scale and logistics; it depended upon the machinery and logic of a rational, industrialised, and empirically organised modern society. The central thesis of this book is that Art Spiegelman’s comics all identify deeply-rooted madness in post-Enlightenment society. Spiegelman maintains, in other words, that the Holocaust was not an aberration, but an inevitable consequence of modernisation. In service of this argument, Smith offers a reading of Spiegelman’s comics, with a particular focus on his three main collections: Breakdowns (1977 and 2008), Maus (1980 and 1991), and In the Shadow of No Towers (2004). He draws upon a taxonomy of terms from comic book scholarship, attempts to theorize madness (including literary portrayals of trauma), and critical works on Holocaust literature. 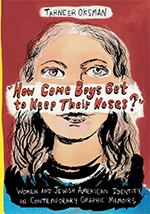 “How Come Boys Get to Keep Their Noses?”
Women and Jewish American Identity in Contemporary Graphic Memoirs

Tahneer Oksman
Columbia University Press
296 pages
ISBN 978-0-231172-75-2
~€ 30,00
February 2016
Publisher’s page
American comics reflect the distinct sensibilities and experiences of the Jewish American men who played an outsized role in creating them, but what about the contributions of Jewish women? Focusing on the visionary work of seven contemporary female Jewish cartoonists, Tahneer Oksman draws a remarkable connection between innovations in modes of graphic storytelling and the unstable, contradictory, and ambiguous figurations of the Jewish self in the postmodern era. Oksman isolates the dynamic Jewishness that connects each frame in the autobiographical comics of Aline Kominsky Crumb, Vanessa Davis, Miss Lasko-Gross, Lauren Weinstein, Sarah Glidden, Miriam Libicki, and Liana Finck. 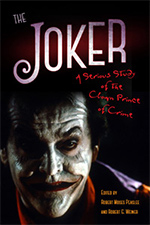 The Joker. A Serious Study of the Clown Prince of Crime

Robert Moses Peaslee und Robert G. Weiner (eds.)
University Press of Mississippi
288 pages
ISBN 978-1-4968-0781-6
~€ 30,00
February 2016
Publisher’s page
Along with Batman, Spider-Man, and Superman, the Joker stands out as one of the most recognizable comics characters in popular culture. While there has been a great deal of scholarly attention on superheroes, very little has been done to understand supervillains. This is the first academic work to provide a comprehensive study of this villain, illustrating why the Joker appears so relevant to audiences today. Batman’s foe has cropped up in thousands of comics, numerous animated series, and three major blockbuster feature films since 1966. Actually, the Joker debuted in DC comics Batman 1 (1940) as the typical gangster, but the character evolved steadily into one of the most ominous in the history of sequential art. Batman and the Joker almost seemed to define each other as opposites, hero and nemesis, in a kind of psychological duality. Scholars from a wide array of disciplines look at the Joker through the lens of feature films, video games, comics, politics, magic and mysticism, psychology, animation, television, performance studies, and philosophy. As the first volume that examines the Joker as complex cultural and cross-media phenomenon, this collection adds to our understanding of the role comic book and cinematic villains play in the world and the ways various media affect their interpretation. Connecting the Clown Prince of Crime to bodies of thought as divergent as Karl Marx and Friedrich Nietzsche, contributors demonstrate the frightening ways in which we get the monsters we need. 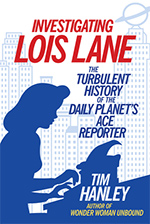 Tim Hanley
Chicago review Press
288 pages
ISBN 978-1-613-73332-5
~$ 18,95
March 2016
Publisher’s page
In a universe full of superheroes, Lois Lane has fought for truth and justice for over 75 years on page and screen without a cape or tights. From her creation by Jerry Siegel and Joe Shuster in 1938 to her forthcoming appearance in Batman v Superman: Dawn of Justice in 2016, from helming her own comic book for twenty-six years to appearing in animated serials, live-action TV shows, and full-length movies, Lois Lane has been a paragon of journalistic integrity and the paramour of the world’s strongest superhero. But her history is one of constant tension. From her earliest days, Lois yearned to make the front page of the Daily Planet, but was held back by her damsel-in-distress role. When she finally became an ace reporter, asinine lessons and her tumultuous romance with Superman dominated her storylines for decades and relegated her journalism to the background. Through it all, Lois remained a fearless and ambitious character, and today she is a beloved icon and an inspiration to many. Though her history is often troubling, Lois’s journey, as revealed in Investigating Lois Lane, showcases her ability to always escape the gendered limitations of each era and of the superhero genre as a whole.