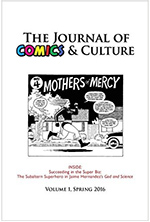 The Journal of Comics and Culture, Vol. 1

Jonathan Gray (ed.)
Pace University Press
226 pages
ISBN 978-0-9619518-5-6
~$ 32,00
April 2016
Publisher’s page
The Journal of Comics and Culture studies the comic and the rapidly evolving medium of the graphic novel and its connection to the wider world of popular culture. Original monographs, research, history, book reviews, and analysis reflect the innovative creative talents in the field, ground-breaking works, and how comics and the graphic novel both reflect and inform American culture. In the past 40 years comics have moved from occupying a decidedly lowbrow niche at the margins of pop culture to the center of the popular and critical imagination. Comics—a catch-all term that encompasses monthly comic books, graphic novels and web comics—are embedded in, relate to and comment upon other forms of media like film, painting, and the novel. 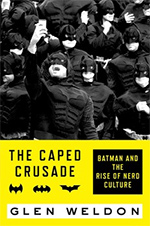 The Caped Crusade:
Batman and the Rise of Nerd Culture

Glen Weldon
Simon & Schuster
336 pages
ISBN 978-1-47675-669-1
~$ 26,00
March 2016
Publisher’s page
Since his creation, Batman has been many things: a two-fisted detective; a planet-hopping gadabout; a campy Pop-art sensation; a pointy-eared master spy; and a grim and gritty ninja of the urban night. For more than three quarters of a century, he has cycled from a figure of darkness to one of lightness and back again; he’s a bat-shaped Rorschach inkblot who takes on the various meanings our changing culture projects onto him. How we perceive Batman’s character, whether he’s delivering dire threats in a raspy Christian Bale growl or trading blithely homoerotic double-entendres with partner Robin on the comics page, speaks to who we are and how we wish to be seen by the world. It’s this endlessly mutable quality that has made him so enduring. In The Caped Crusade, with humor and insight, Glen Weldon, book critic for NPR and author of Superman: The Unauthorized Biography, lays out Batman’s seventy-eight-year cultural history and shows how he has helped make us who we are today and why his legacy remains so strong. 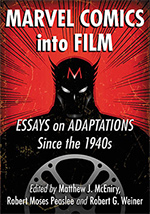 Marvel Comics into Film;
Essays on Adaptations Since the 1940s

Matthew J. McEniry, Robert Moses Peaslee and Robert G. Weiner (eds.)
McFarland
280 pages
ISBN 978-0-7864-4304-8
~$ 35,00
March 2016
Publisher’s page
Marvel Studios’ approach to its Cinematic Universe—beginning with the release of Iron Man (2008)—has become the template for successful management of blockbuster film properties. Yet films featuring Marvel characters can be traced back to the 1940s, when the Captain America serial first appeared on the screen. This collection of new essays is the first to explore the historical, textual and cultural context of the larger cinematic Marvel universe, including serials, animated films, television movies, non–U.S. versions of Marvel characters, films that feature characters licensed by Marvel, and the contemporary Cinematic Universe as conceived by Kevin Feige and Marvel Studios. Films analyzed include Transformers (1986), Howard the Duck (1986), Blade (1998), Planet Hulk (2010), Iron Man: Rise of Technovore (2013), Elektra (2005), the Conan the Barbarian franchise (1982–1990), Ultimate Avengers (2006) and Ghost Rider (2007). 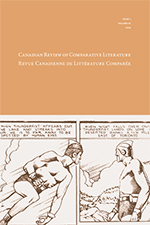 Chris Reyns-Chikuma and Gail de Vos (eds.)
University of Alberta
193 pages
ISSN: 1913-9659
March 2016
Publisher’s page
Canadian comic artists are well known beyond our borders from Joe Shuster, the creator of “Superman”—who, like Hal Foster, the re-creator of “Tarzan”, was born in Canada but left early for the US, to contemporary award winning comics artists such as Seth, Chester Brown, Guy Delisle, and Julie Doucet who often remain in Canada to create their works. (Continue to the Introduction) 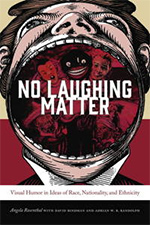 No Laughing Matter:
Visual Humor in Ideas of Race, Nationality, and Ethnicity

Angela Rosenthal, David Bindman and Adrian W. B. Randolph (eds.)
University Press of New England
328 pages
ISBN 978-1-61168-821-4
~€ 45,00
December 2015
Publisher’s page
In the wake of the Charlie Hebdo attacks, this collection—which gathers scholars in the fields of race, ethnicity, and humor—seems especially urgent. Inspired by Denmark’s Muhammad cartoons controversy, the contributors inquire into the role that racial and ethnic stereotypes play in visual humor and the thin line that separates broad characterization as a source of humor from its power to shock or exploit. The authors investigate the ways in which humor is used to demean or give identity to racial, national, or ethnic groups and explore how humor works differently in different media, such as cartoons, photographs, film, video, television, and physical performance.

Roger Todd Whitson (ed.)
Alliance of Digital Humanities Organizations (ADHO)
7 Contributions
Open access
December 2015
Publisher’s page
As you explore the diverse works included in this collection, we invite you particularly to consider the scholarly process that is on display and the opportunities we have in the digital humanities to embrace and refine these processes. Each work represents the different strengths of its author(s) in modality, use of original and remixed imagery, and textual methods. These works only display a small section of what is possible in the broad realm that can be analyzed as sequential art or comics. The history of humanities computing, broadly construed, is filled with multimodal works: however, we are still at our infancy in truly building spaces that are receptive to new methods, with systems of peer review that encourage innovation and experimentation. The challenges we faced in constructing this issue are a reminder that while the academic essay and monograph are entrenched structures with strong institutional support, the scholarly multimedia text is still emerging. (Continue to the Introduction)