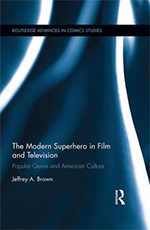 Publisher’s page
Hollywood’s live-action superhero films currently dominate the worldwide box-office, with the characters enjoying more notoriety through their feature film and television depictions than they have ever before. This book argues that this immense popularity reveals deep cultural concerns about politics, gender, ethnicity, patriotism and consumerism after the events of 9/11. Superheroes have long been agents of hegemony, fighting for abstract ideals of justice while overall perpetuating the American status quo. Yet at the same time, the book explores how the genre has also been utilized to question and critique these dominant cultural assumptions. 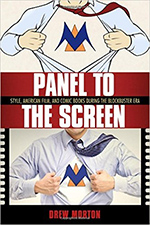 Publisher’s page
Over the past forty years, American film has entered into a formal interaction with the comic book. Such comic book adaptations as Sin City, 300, and Scott Pilgrim vs. the World have adopted components of their source materials’ visual style. The screen has been fractured into panels, the photographic has given way to the graphic, and the steady rhythm of cinematic time has evolved into a far more malleable element. In other words, films have begun to look like comics. Yet, this interplay also occurs in the other direction. In Panel to the Screen, Drew Morton examines this dialogue in its intersecting and rapidly changing cultural, technological, and industrial contexts. Early on, many questioned the prospect of a “low” art form suited for children translating into “high” art material capable of drawing colossal box of ce takes. Now the naysayers are as quiet as the queued crowds at Comic-Cons are massive. Morton provides a nuanced account of this phenomenon by using formal analysis of the texts in a real world context of studio budgets, grosses, and audience reception. 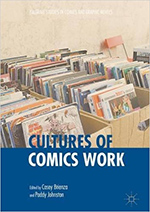 Publisher’s page
This anthology explores tensions between the individualistic artistic ideals and the collective industrial realities of contemporary cultural production with eighteen all-new chapters presenting pioneering empirical research on the complexities and controversies of comics work. Art Spiegelman. Alan Moore. Osamu Tezuka. Neil Gaiman. Names such as these have become synonymous with the medium of comics. Meanwhile, the large numbers of people without whose collective action no comic book would ever exist in the first place are routinely overlooked. Cultures of Comics Work unveils this hidden, global industrial labor of writers, illustrators, graphic designers, letterers, editors, printers, typesetters, publicists, publishers, distributors, translators, retailers, and countless others both directly and indirectly involved in the creative production of what is commonly thought of as the comic book. Drawing upon diverse theoretical and methodological perspectives, an international and interdisciplinary cohort of cutting-edge researchers and practitioners intervenes in debates about cultural work and paves innovative directions for comics scholarship. 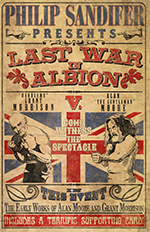 Publisher’s page
In the late twentieth century, beneath the surface of Britain’s green and pleasant land, raged a war that spanned the heights of mystical transcendence and the most obscure gutters of popular culture. The stakes were unfathomably vast: the fate of the twenty-first century, the shape of an entire artistic medium, and whether or not several people would make their rent. On one side was Alan Moore, the acclaimed literary genius who would transform comics forever. On the other was Grant Morrison, the upstart punk who never met an idol he didn’t want to knock off its perch. In Volume One of this incredible tale you’ll learn how an ex-drug dealer from the slums of Northampton and a failed rock star from Glasgow made their way into the comics industry and found themselves locked in an artistic rivalry that would shake the very foundations of Britain. Starting from their beginnings writing and drawing comic strips like Captain Clyde and Maxwell the magic Cat and continuing through Moore’s breakout runs on Marvelman and V for Vendetta and explosion onto the US scene with Swamp Thing, it is the fantastically unlikely tale of how the British comics industry came to produce the two greatest wizards of their generation. This is the story of gothic rock and obscenity trials. Of William Blake and William S. Burroughs. Of Hieronymus Bosch and Enid Blyton. This is the story of the Last War in Albion. 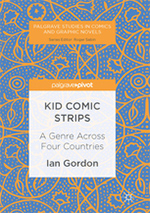 Publisher’s page
This book looks at the humor that artists and editors believed would have appeal in four different countries. Ian Gordon explains how similar humor played out in comic strips across different cultures and humor styles. By examining Skippy and Ginger Meggs, the book shows a good deal of similarities between American and Australian humor while establishing some distinct differences. In examining the French translation of Perry Winkle, the book explores questions of language and culture. By shifting focus to a later period and looking at the American and British comics entitled Dennis the Menace, two very different comics bearing the same name, Kid Comic Strips details both differences in culture and traditions and the importance of the type of reader imagined by the artist. 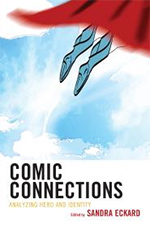 Publisher’s page
Comics are all around campuses everyday, and with students arriving less prepared to tackle basics like reading, writing, and analyzing, this text helps connect what students enjoy to the classroom. Comic Connections: Analyzing Hero and Identity is designed to help teachers from middle school through college find a new strategy that they can use right away as part of their curricular goals. Each chapter has three pieces: comic relevance, classroom connections, and concluding thoughts; this format allows a reader to pick-and-choose where to start. Some readers might want to delve into the history of a comic to better understand characters and their usefulness, while other readers might want to pick up an activity, presentation, or project that they can fold into that day’s lesson.