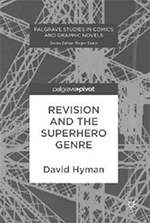 Revision and the Superhero Genre

Publisher’s page
This book argues that superhero revision offers new perspectives on the theory and practice of revision in broader contexts, in particular composition studies. Key developments in the history of superhero and composition revision reveal that both are deeply embedded in questions of narrative temporality. The book looks at three unorthodox revision strategies: sideshadowing, in which traditional tropes of superhero narratives are told with “new” characters that clearly evoke traditional ones; excavation, the reintegration and reinterpretation of elements and influences from earlier texts that have been de-emphasized or written out of continuity; and homodoxy, the narrative coexistence of inconsistent elements culled from different versions of a character’s textual history. The ensuing cross-disciplinary exploration helps correct a distorted stereotype of revision as a neutral mechanical process, revealing it instead as a potent force operating across a spectrum that ranges from restrictive adherence to orthodoxies, to radical resistance against the primacy of tradition. 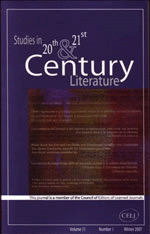 Publisher’s page
From the Introduction: ReDrawing of Narrative Boundaries: An Introduction provides an overview of the comics studies field as it relates to discussions and debates regarding its relationship to the study of literature and the arts. It provides a snapshot of today’s comics studies field, including how the scholarly essays collected for this special issue, A Planetary Republic of Comic Book Letters: Drawing Expansive Narrative Boundaries, work to deepen and widen our understanding of comics, and comics from all over the planet. Individually and collectively they eschew the lean toward the fill-in-the-blank (lit, film, etc.) comparisons, and instead excavate and theorize comics on their own terms. 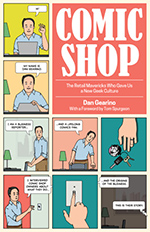 Comic Shop:
The Retail Mavericks Who Gave Us a New Geek Culture

Publisher’s page
The early 1970s saw the birth of the modern comic book shop. Its rise was due in large part to a dynamic entrepreneur, Phil Seuling. His direct market model allowed shops to get comics straight from the publishers, bypassing middlemen. Stores could better customize their offerings and independent publishers could now access national distribution. In this way, shops opened up a space for quirky ideas to gain an audience and helped transform small-press series, from Teenage Mutant Ninja Turtles to Bone, into media giants. Comic Shop is the first book to trace the history of these cultural icons. Dan Gearino brings us from their origins to the present day, when the rise of digital platforms has the industry at a crossroads even as sales are robust. He spends a year with stores around the country, with a spotlight on The Laughing Ogre in Columbus, Ohio. Along the way he interviews those who shaped comics retailing from the early days, including many pioneering women; top creators; and shop owners who continue to push the industry in new directions. A guide to forty of the most interesting shops around the United States and Canada is a bonus for fans. 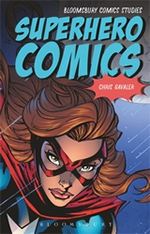 Publisher’s page
A complete guide to the history, form and contexts of the genre, Superhero Comics helps readers explore the most successful and familiar of comic book genres. In an accessible and easy-to-navigate format, the book reveals: The history of superhero comics-from mythic influences to 21st century evolutions; Cultural contexts-from the formative politics of colonialism, eugenics, KKK vigilantism, and WWII fascism to the Cold War’s transformative threat of mutually assured destruction to the on-going revolutions in African American and sexual representation; Key texts-from the earliest pre-Comics-Code Superman and Batman to the latest post-Code Ms. Marvel and Black Panther; Approaches to visual analysis-from layout norms to narrative structure to styles of abstraction. 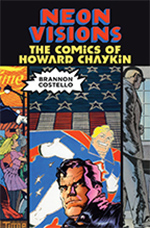 Publisher’s page
In Neon Visions, Brannon Costello offers the first book-length critical evaluation of Chaykin’s work and confronts the blind spots in comics scholarship that consign this seminal artist to the margins. He argues that Chaykin’s contributions are often overlooked because his comics eschew any pretensions to serious literature. Instead, Chaykin’s work revels in the cliffhanger thrills of heroic-adventure genres and courts outrage with transgressive depictions of violence and sexuality. Examining Chaykin’s career from his early successes to compelling contemporary series such as City of Tomorrow, Dominic Fortune, and the controversial Black Kiss 2, Costello explores how this inventive body of work, through its evolving treatment of the theme of authenticity, incisively investigates popular culture’s capacity to foster or constrain individual identity and political agency. Challenging prevailing assumptions about the types of comics deemed worthy of scholarly attention, Costello reveals that the work of an artist as distinctive as Howard Chaykin demands a nuanced reading—one that confronts his unique approach to the comics medium, his blending of autobiographical themes and genre trademarks, and his engagement with comic books as artifacts of consumer culture. 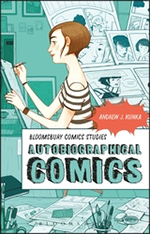 Publisher’s page
A complete guide to the history, form and contexts of the genre, Autobiographical Comics helps readers explore the increasingly popular genre of graphic life writing. In an accessible and easy-to-navigate format, the book covers such topics as: The history and rise of autobiographical comics; Cultural contexts; Key texts – including Maus, Robert Crumb, Persepolis, Fun Home, and American Splendor; Important theoretical and critical approaches to autobiographical comics. Autobiographical Comics includes a glossary of crucial critical terms, annotated guides to further reading and online resources and discussion questions to help students and readers develop their understanding of the genre and pursue independent study.