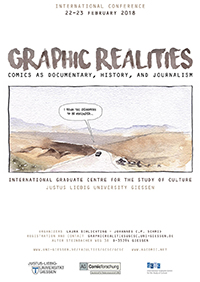 Admission is free, but attendants are kindly asked to register until February 10th 2018 at graphicrealities@gcsc.uni-giessen.de.

Organizer’s outline:
“While comics have traditionally been associated with fictional, especially funny and/or fantastic stories, they have in recent decades become a major vehicle for nonfiction, as well. This development coincides with a time that has been described as ‘post-truth’, in which established news media face a crisis of confidence. The turn towards comics is a turn towards a medium, which inherently promotes simplification and exaggeration. Cartoon imagery thus immediately exhibits the subjectivity of the artist and her or his interpretation – but what could be considered a hindrance towards factual reporting has become an important resource. The overt display of subjectivity and medial limitations as a show of honesty has been described as an authentication strategy of graphic nonfiction. In contrast to formats based on camera-recorded images like photography and film nonfiction comics cannot lay claim to indexing premedial reality. Rather, individual graphic styles index their own creator who as witness becomes the main authenticator. Thus, comics shift the weight of authentication from medial prerequisites towards their authors and artists and thus the textual properties referencing them. One of the questions that will be discussed at the conference is thus the relation of inherent medial properties of comics as vehicle for nonfiction.
While among graphic nonfiction life writing in particular has received widespread scholarly attention, this conference will focus on recent approaches to comics as documentary, history, and journalism. As opposed to graphic memoirs in which authors reflect upon their own lives and experiences, these works focus on the lives and experiences of others. Thus, authors and artists need to do justice towards their subjects, as well as to their own experience and negotiate their own voices within their stories. This becomes especially relevant as a majority of graphic reportages centers around highly traumatizing crises and catastrophes, such as war, displacement, natural disasters, and oppression. The conference is intended to explore how authors and artists utilize the medium of comics for nonfiction and address these ‘graphic realities’.”