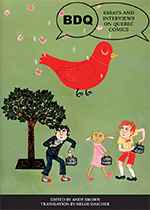 Publisher’s page
The comics community in Quebec has long been heralded as unique, blending the clear line aesthetic of Europe with the underground influences of North America. Think Tintin meets R. Crumb. Of course, most of the work is in the French language. And while artists such as Michel Rabagliati, Guy Delisle, and Julie Doucet are now internationally recognized, much of it is still unknown outside the province. Conundrum Press started its BDANG imprint in 2004 to rectify this situation by translating and publishing work from Quebec comic artists. BDANG stands for Bande Dessinée en ANGlais, or French comics in English. This volume is a companion to the imprint, collecting interviews and essays on Quebec comics, to give context to the history and breadth of the work. Read about the early strips in Montreal newspapers at the turn of the century, Albert Chartier, cartoonist of rural Quebec, the zany antics of Red Ketchup, the underground minicomics boom of the 1990s, the anglophones who found themselves a part of the mix, and the hallucinogenic punk prophet Valium. 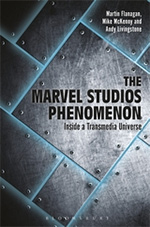 The Marvel Studios Phenomenon:
Inside a Transmedia Universe

Publisher’s page
Marvel Studios has provided some of the biggest worldwide cinematic hits of the last eight years, from Iron Man (2008) to the record-breaking The Avengers (2012), and beyond. Having announced plans to extend its production of connected texts in cinema, network and online television until at least 2028, the new aesthetic patterns brought about by Marvel’s ‘shared’ media universe demand analysis and understanding. The Marvel Studios Phenomenon evaluates the studio’s identity, as well as its status within the structures of parent Disney. In a new set of readings of key texts such as Captain America: The Winter Soldier, Guardians of the Galaxy and Agents of S.H.I.E.L.D., the thematics of superhero fiction and the role of fandom are considered. The authors identify milestones from Marvel’s complex and controversial business history, allowing us to appraise its industrial status: from a comic publisher keen to exploit its intellectual property, to an independent producer, to successful subsidiary of a vast entertainment empire. 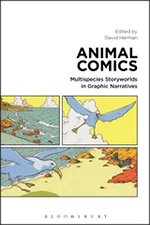 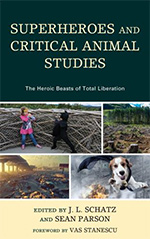 Publisher’s page
Superheroes and Critical Animal Studies explores and puts into dialogue two growing field of studies, comic studies and critical animal studies. The book’s aim is to create a form of praxis that people can use to actualize many of the values superheroes strive to protect. To this end, contributor chapters are divided into sections on the foundation of superhero representation and how to teach it, criticisms of particular superheroes and how they fall short of truly protecting the planet, and interpretations of specific characters that can be read to produce a positive orientation to the nonhuman world and craft strategies to promote liberation in the real world. Altogether, the book produces a form of scholarship on the media that is both intersectional in scope and tailored to have an impact on the reader beyond theorizing superheroes for theorization’s sake. 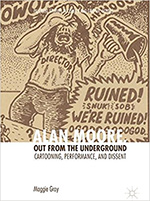 Alan Moore, Out from the Underground:
Cartooning, Performance, and Dissent

Publisher’s page
This book explores Alan Moore’s career as a cartoonist, as shaped by his transdisciplinary practice as a poet, illustrator, musician and playwright as well as his involvement in the Northampton Arts Lab and the hippie counterculture in which it took place. It traces Moore’s trajectory out from the underground comix scene of the 1970s and into a commercial music press rocked by the arrival of punk. In doing so it uncovers how performance has shaped Moore’s approach to comics and their political potential. Drawing on the work of Bertolt Brecht, who similarly fused political dissent with experimental popular art, this book considers what looking strangely at Alan Moore as cartoonist tells us about comics, their visual and material form, and the performance and politics of their reading and making.

Open Access
If media authorship can be understood “as a site of cultural tension” (Johnson and Gray 2013, 10), then a deeper understanding of comics authorship will also provide clues regarding the sustaining—and constraining— of creative practices in other media ecologies and intermedial interactions (such as, for instance, adaptations). For comics, this implies combining insights from comics scholars, practitioners as well as agents involved in the publication and dissemination of comics. This issue, building on the findings of extant scholarship on authorship in comics and other media, hopes to provide incentive for further adventures into the (almost) unknown of comics authorship.