Publisher’s page
Jessica Jones barged onto our screens in November 2015, courtesy of Marvel and Netflix, presenting a hard-drinking protagonist who wrestles with her own inner (and outer) demons. Gaining enhanced abilities as a teenager, she eschews the ‘super costume’ and is far more concerned with the problems of daily life. But when Jessica falls under the control of a villain, her life changes forever. Based on the comic book Alias, the show won a large following and critical acclaim for its unflinching look at subjects like abuse, trauma, PTSD, rape culture, alcoholism, drug addiction, victims’ plight and family conflicts. This collection of new essays offers insight into the show’s complex themes and story lines. 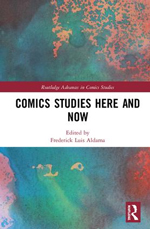 Publisher’s page
Comics Studies Here and Now marks the arrival of comics studies scholarship that no longer feels the need to justify itself within or against other fields of study. The essays herein move us forward, some in their re-diggings into comics history and others by analyzing comics—and all its transmedial and fan-fictional offshoots—on its own terms. Comics Studies stakes the flag of our arrival—the arrival of comics studies as a full-fledged discipline that today and tomorrow excavates, examines, discusses, and analyzes all aspects that make up the resplendent planetary republic of comics. This collection of scholarly essays is a testament to the fact that comic book studies have come into their own as an academic discipline; simply and powerfully moving comic studies forward with their critical excavations and theoretical formulas based on the common sense understanding that comics add to the world as unique, transformative cultural phenomena. 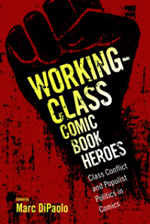