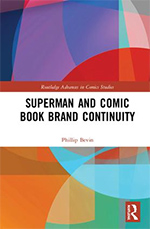 Publisher’s page
Superman and Comic Book Brand Continuity traces the development of comic book continuity through the case study of Superman, examining the character’s own evolution across several media, including comics, radio, television, and film. Superman’s relationship with continuity illustrates a key feature of the way in which people in western societies construct stories about themselves. In this respect, the book is a study of narrative and how comic book continuity reflects the way that, in wider western post-enlightenment culture, storytelling shapes the common sense and received wisdoms that influence how we perceive “reality.” The scope of the analysis extends from Superman’s creation in the late 1930s to the recent films Man of Steel (2013) and Batman v. Superman: Dawn of Justice (2016), as well as the current comic book reboot Rebirth (2016). 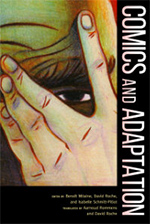 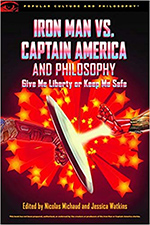 Publisher’s page
Iron Man or Captain America? Which one is superior―as a hero, as a role model, or as a personification of American virtue? Philosophers who take different sides come together in Iron Man versus Captain America to debate these issues and arrive at a deeper understanding of the strengths and weaknesses of these iconic characters. The discussion ranges over politics, religion, ethics, psychology, and metaphysics. The book you have in your hands is a little unusual. Often, philosophy and popular culture books explore many aspects of a pop culture phenomenon. This book focuses on one specific question, “Who is better?” You might think that there isn’t much to say on this issue, and we’re sure you have your own opinion already, but comparing Captain America and Iron Man brings out a lot of questions and problems we don’t normally think about.

The reason why these two men in philosophical competition with each other is so important and terrifying isn’t just because they are the good guys, but because they are both our good guys. Let’s be honest, Iron man isn’t exactly a Communist superhero, and Captain America is well Captain America. Tony Stark is the poster boy for capitalism. In fact, Stan Lee created him specifically to see if he could make people love a ragingly selfish capitalist. Captain America was created originally as a kind of propaganda to support our war effort . . . his first issue shows him punching Hitler! BOTH represent key aspects of the United States: Our economic, social philosophy “competition makes things better” and the ideas of patriotism, liberty, and just doing the right thing. When these heroes fight, they’re revealing something we know at the core of our being is both a tremendous strength and a tremendous danger in our society . . . We are at intellectual war with ourselves! And we don’t just mean liberals and conservatives, religious and non-religious, Ford and Chevy. We mean each of us living here in the States embodies a fight between these two men and their philosophies . . . the unsolvable problem of safety vs. freedom.