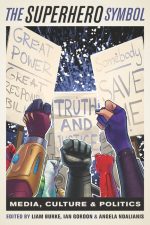 “‘As a man, I’m flesh and blood, I can be ignored, I can be destroyed; but as a symbol… as a symbol I can be incorruptible, I can be everlasting’. In the 2005 reboot of the Batman film franchise, Batman Begins, Bruce Wayne articulates how the figure of the superhero can serve as a transcendent icon.
It is hard to imagine a time when superheroes have been more pervasive in our culture. Today, superheroes are intellectual property jealously guarded by media conglomerates, icons co-opted by grassroots groups as a four-color rebuttal to social inequities, masks people wear to more confidently walk convention floors and city streets, and bulletproof banners that embody regional and national identities. From activism to cosplay, this collection unmasks the symbolic function of superheroes.
Bringing together superhero scholars from a range of disciplines, alongside key industry figures such as Harley Quinn co-creator Paul Dini, The Superhero Symbol provides fresh perspectives on how characters like Captain America, Iron Man, and Wonder Woman have engaged with media, culture, and politics, to become the “everlasting” symbols to which a young Bruce Wayne once aspired.” 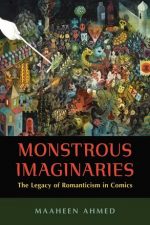 Monstrous Imaginaries: The Legacy of Romanticism in Comics

“Monsters seem inevitably linked to humans and not always as mere opposites. Maaheen Ahmed examines good monsters in comics to show how Romantic themes from the eighteenth and the nineteenth centuries persist in today’s popular culture. Comics monsters, questioning the distinction between human and monster, self and other, are valuable conduits of Romantic inclinations.
Engaging with Romanticism and the many monsters created by Romantic writers and artists such as Mary Shelley, Victor Hugo, and Goya, Ahmed maps the heritage, functions, and effects of monsters in contemporary comics and graphic novels. She highlights the persistence of recurrent Romantic features through monstrous protagonists in English- and French-language comics and draws out their implications. Aspects covered include the dark Romantic predilection for ruins and the sordid, the solitary protagonist and his quest, nostalgia, the prominence of the spectacle as well as excessive emotions, and above all, the monster’s ambiguity and rebelliousness.
Ahmed highlights each Romantic theme through close readings of well-known but often overlooked comics, including Enki Bilal’s Monstre tetralogy, Jim O’Barr’s The Crow, and Emil Ferris’s My Favorite Thing Is Monsters, as well as the iconic comics series Alan Moore’s Swamp Thing and Mike Mignola’s Hellboy. In blurring the otherness of the monster, these protagonists retain the exaggeration and uncontrollability of all monsters while incorporating Romantic characteristics.” 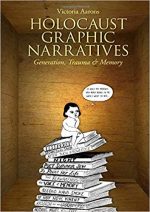 “In Holocaust Graphic Narratives, Victoria Aarons demonstrates the range and fluidity of this richly figured genre. Employing memory as her controlling trope, Aarons analyzes the work of the graphic novelists and illustrators, making clear how they extend the traumatic narrative of the Holocaust into the present and, in doing so, give voice to survival in the wake of unrecoverable loss. In recreating moments of traumatic rupture, dislocation, and disequilibrium, these graphic narratives contribute to the evolving field of Holocaust representation and establish a new canon of visual memory. The intergenerational dialogue established by Aarons’ reading of these narratives speaks to the on-going obligation to bear witness to the Holocaust. Examined together, these intergenerational works bridge the erosions created by time and distance. As a genre of witnessing, these graphic stories, in retracing the traumatic tracks of memory, inscribe the weight of history on generations that follow.” 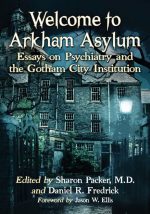 Welcome to Arkham Asylum: Essays on Psychiatry and the Gotham City Institution *

“Arkham Asylum for the Criminally Insane is a staple of the Batman universe, evolving into a franchise comprised of comic books, graphic novels, video games, films, television series and more. The Arkham franchise, supposedly light-weight entertainment, has tackled weighty issues in contemporary psychiatry. Its plotlines reference clinical and ethical controversies that perplex even the most up-to-date professionals. The 25 essays in this collection explore the significance of Arkham’s sinister psychiatrists, murderous mental patients, and unethical geneticists. It invites debates about the criminalization of the mentally ill, mental patients who move from defunct state hospitals into expanding prisons, madness versus badness, sociopathy versus psychosis, the “insanity defense” and more. Invoking literary figures from Lovecraft to Poe to Caligari, the 25 essays in this collection are a broad-ranging and thorough assessment of the franchise and its relationship to contemporary psychiatry.”