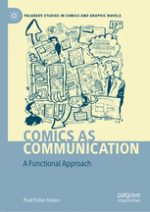 Comics as Communication: A Functional Approach

“This book explores how comics function to make meanings in the manner of a language. It outlines a framework for describing the resources and practices of comics creation and readership, using an approach that is compatible with similar descriptions of linguistic and multimodal communication.
The approach is based largely on the work of Michael Halliday, drawing also on the pragmatics of Paul Grice, the Text World Theory of Paul Werth and Joanna Gavins, and ideas from art theory, psychology and narratology. This brings a broad Hallidayan framework of multimodal analysis to comics scholarship, and plays a part in extending that tradition of multimodal linguistics to graphic narrative.” 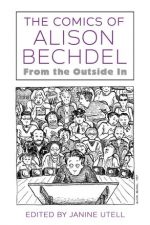 The Comics of Alison Bechdel: From the Outside In

“Alison Bechdel is both a driver and beneficiary of the welcoming of comics into the mainstream. Indeed, the seemingly simple binary of outside/inside seems perpetually troubled throughout the career of this important comics artist, known for Fun Home, Are You My Mother?, and Dykes to Watch Out For. This volume extends the body of scholarship on her work from a range of interdisciplinary perspectives.
In a definitive collection of original essays, scholars cover the span of Bechdel’s career, placing her groundbreaking early work within the context of her more well-known recent projects. The contributors provide new insights on major themes in Bechdel’s work, such as gender performativity, masculinity, lesbian politics and representation, trauma, life writing, and queer theory.
Situating Bechdel among other comics artists, this book charts possible influences on her work, probes the experimental traits of her comics in their representations of kinship and trauma, combs archival materials to gain insight into Bechdel’s creative process, and analyzes her work in community building and space making through the comics form.
Ultimately, the volume shows that Bechdel’s work consists of performing a series of selves—serializing the self, as it were—each constructed and refracted across and within her chosen artistic modes and genres.” 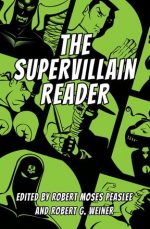 “The Supervillain Reader, featuring both reprinted and original essays, reveals why we are so fascinated with the villain. The obsession with the villain is not a new phenomenon, and, in fact, one finds villains who are “super” going as far back as ancient religious and mythological texts. This innovative collection brings together essays, book excerpts, and original content from a wide variety of scholars and writers, weaving a rich tapestry of thought regarding villains in all their manifestations, including film, literature, television, games, and, of course, comics and sequential art. While The Supervillain Reader focuses on the latter, it moves beyond comics to show how the vital concept of the supervillain is part of our larger consciousness.
Editors Robert Moses Peaslee and Robert G. Weiner collect pieces that explore how the villain is a complex part of narratives regardless of the original source. The Joker, Lex Luthor, Harley Quinn, Darth Vader, and Magneto must be compelling, stimulating, and proactive, whereas the superhero (or protagonist) is most often reactive. Indeed, whether in comics, films, novels, religious tomes, or video games, the eternal struggle between villain and hero keeps us coming back to these stories over and over again.” 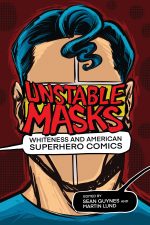 New Suns: Race, Gender, and Sexuality in the Speculative

“In Unstable Masks: Whiteness and American Superhero Comics, Sean Guynes and Martin Lund bring together a series of essays that contextualize the histories and stakes of whiteness studies, superhero comics, and superhero studies for academics, fans, and media-makers alike. The volume illustrates how the American comic book superhero is fundamentally a figure of white power and white supremacy and ultimately calls for diversity in superhero comics as well as a democratized media culture.
Contributors not only examine superhero narratives but also delve into the production, distribution, audience, and reception of those narratives, highlighting the imbrication of forces that have helped to create, normalize, question, and sometimes even subvert American beliefs about whiteness and race. Unstable Masks considers the co-constitutive nature of identity, representation, narrative, production and consumption, and historical and cultural contexts in forging the stereotypes that decide who gets to be a superhero and who gets to be American on the four-color pages of comic books.” 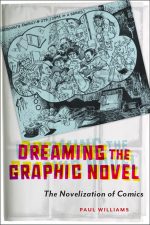 Dreaming the Graphic Novel: The Novelization of Comics

“The term “graphic novel” was first coined in 1964, but it wouldn’t be broadly used until the 1980s, when graphic novels such as Watchmen and Maus achieved commercial success and critical acclaim. What happened in the intervening years, after the graphic novel was conceptualized yet before it was widely recognized?
Dreaming the Graphic Novel examines how notions of the graphic novel began to coalesce in the 1970s, a time of great change for American comics, with declining sales of mainstream periodicals, the arrival of specialty comics stores, and (at least initially) a thriving underground comix scene. Surveying the eclectic array of long comics narratives that emerged from this fertile period, Paul Williams investigates many texts that have fallen out of graphic novel history. As he demonstrates, the question of what makes a text a ‘graphic novel’ was the subject of fierce debate among fans, creators, and publishers, inspiring arguments about the literariness of comics that are still taking place among scholars today.
Unearthing a treasure trove of fanzines, adverts, and unpublished letters, Dreaming the Graphic Novel gives readers an exciting inside look at a pivotal moment in the art form’s development.”