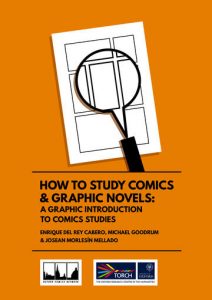 How to Study Comics and Graphic Novels: A Graphic Introduction to Comics Studies was written by Enrique del Rey Cabero and Michael Goodrum and illustrated by Josean Morlesín Mellado, all members of The Oxford Comics Network. The book has recently been published by TORCH, The Oxford Research Centre in the Humanities.

After a foreword by Paul Williams, Associate Professor of 21st Literature and Culture at the University of Exeter, How to Study Comics and Graphic Novels explains the basics of comics and comic studies in the form of a comic. The book also contains an interview with Nick Sousanis and a list of recommendations for further reading.

Further information as well as a PDF of the book can be found here on the page of the publisher.