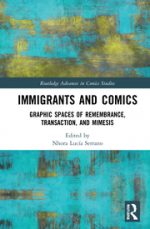 Immigrants and Comics:
Graphic Spaces of Remembrance, Transaction, and Mimesis

“Immigrants and Comics is an interdisciplinary, themed anthology that focuses on how comics have played a crucial role in representing, constructing, and reifying the immigrant subject and the immigrant experience in popular global culture of the twentieth and twenty-first centuries.
Nhora Lucía Serrano and a diverse group of contributors examine immigrant experience as they navigate new socio-political milieux in cartoons, comics, and graphic novels across cultures and time periods. They interrogate how immigration is portrayed in comics and how the ‘immigrant’ was an indispensable and vital trope to the development of the comics medium in the twentieth century. At the heart of the book‘s interdisciplinary nexus is a critical framework steeped in the ideas of remembrance and commemoration, what Pierre Nora calls lieux de mémoire.
This book will be of interest to students and scholars in Visual Studies, Comparative Literature, English, Ethnic Studies, Francophone Studies, American Studies, Hispanic Studies, art history, and museum studies.” 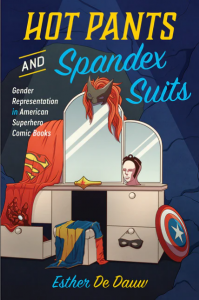 “The superheroes from DC and Marvel comics are some of the most iconic characters in popular culture today. But how do these figures idealize certain gender roles, body types, sexualities, and racial identities at the expense of others?
Hot Pants and Spandex Suits offers a far-reaching look at how masculinity and femininity have been represented in American superhero comics, from the Golden and Silver Ages to the Modern Age. Scholar Esther De Dauw contrasts the bulletproof and musclebound phallic bodies of classic male heroes like Superman, Captain America, and Iron Man with the figures of female counterparts like Wonder Woman and Supergirl, who are drawn as superhumanly flexible and plastic. It also examines the genre’s ambivalent treatment of LGBTQ representation, from the presentation of gay male heroes Wiccan and Hulkling as a model minority couple to the troubling association of Batwoman’s lesbianism with monstrosity. Finally, it explores the intersection between gender and race through case studies of heroes like Luke Cage, Storm, and Ms. Marvel.
Hot Pants and Spandex Suits is a fascinating and thought-provoking consideration of what superhero comics teach us about identity, embodiment, and sexuality.” 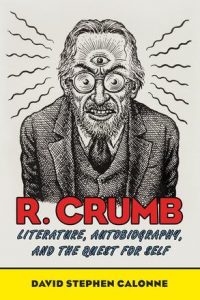 R. Crumb:
Literature, Autobiography, and the Quest for Self

“Robert Crumb (b. 1943) read widely and deeply a long roster of authors including Robert Louis Stevenson, Charles Dickens, J. D. Salinger, Jack Kerouac, William S. Burroughs, and Allen Ginsberg, as well as religious classics including biblical, Buddhist, Hindu, and Gnostic texts. Crumb’s genius, according to author David Stephen Calonne, lies in his ability to absorb a variety of literary, artistic, and spiritual traditions and incorporate them within an original, American mode of discourse that seeks to reveal his personal search for the meaning of life.
R. Crumb: Literature, Autobiography, and the Quest for Self contains six chapters that chart Crumb’s intellectual trajectory and explore the recurring philosophical themes that permeate his depictions of literary and biographical works and the ways he responds to them through innovative, dazzling compositional techniques.
Calonne explores the ways Crumb develops concepts of solitude, despair, desire, and conflict as aspects of the quest for self in his engagement with the book of Genesis and works by Franz Kafka, Jean-Paul Sartre, the Beats, Charles Bukowski, and Philip K. Dick, as well as Crumb’s illustrations of biographies of musicians Jelly Roll Morton and Charley Patton. Calonne demonstrates how Crumb’s love for literature led him to attempt an extremely faithful rendering of the texts he admired while at the same time highlighting for his readers the particular hidden philosophical meanings he found most significant in his own autobiographical quest for identity and his authentic self.” 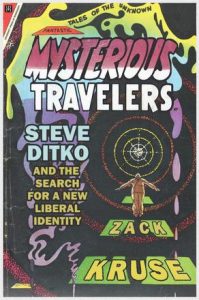 Mysterious Travelers:
Steve Ditko and the Search for a New Liberal Identity

“Steve Ditko (1927–2018) is one of the most important contributors to American comic books. As the cocreator of Spider-Man and sole creator of Doctor Strange, Ditko made an indelible mark on American popular culture. Mysterious Travelers: Steve Ditko and the Search for a New Liberal Identity resets the conversation about his heady and powerful work. Always inward facing, Ditko’s narratives employed superhero and supernatural fantasy in the service of self-examination, and with characters like the Question, Mr. A, and Static, Ditko turned ordinary superhero comics into philosophic treatises. Many of Ditko’s philosophy-driven comics show a clear debt to ideas found in Ayn Rand’s Objectivism. Unfortunately, readers often reduce Ditko’s work to a mouthpiece for Rand’s vision. Mysterious Travelers unsettles this notion.
In this book, Zack Kruse argues that Ditko’s philosophy draws on a complicated network of ideas that is best understood as mystic liberalism. Although Ditko is not the originator of mystic liberalism, his comics provide a unique window into how such an ideology operates in popular media. Examining selections of Ditko’s output from 1953 to 1986, Kruse demonstrates how Ditko’s comics provide insight into a unique strand of American thought that has had a lasting impact.”