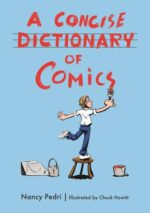 A Concise Dictionary of Comics

“Written in straightforward, jargon-free language, A Concise Dictionary of Comics guides students, researchers, readers, and educators of all ages and at all levels of comics expertise. It provides them with a dictionary that doubles as a compendium of comics scholarship.
A Concise Dictionary of Comics provides clear and informative definitions for each term. It includes twenty-five witty illustrations and pairs most defined terms with references to books, articles, book chapters, and other relevant critical sources. All references are dated and listed in an extensive, up-to-date bibliography of comics scholarship. Each term is also categorized according to type in an index of thematic groupings. This organization serves as a pedagogical aid for teachers and students learning about a specific facet of comics studies and as a research tool for scholars who are unfamiliar with a particular term but know what category it falls into. These features make A Concise Dictionary of Comics especially useful for critics, students, teachers, and researchers, and a vital reference to anyone else who wants to learn more about comics.” 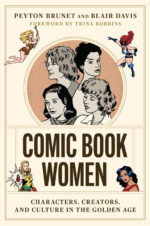 “The history of comics has centered almost exclusively on men. Comics historians largely describe the medium as one built by men telling tales about male protagonists, neglecting the many ways in which women fought for legitimacy on the page and in publishers’ studios. Despite this male-dominated focus, women played vital roles in the early history of comics. The story of how comic books were born and how they evolved changes dramatically when women like June Tarpé Mills and Lily Renée are placed at the center rather than at the margins of this history, and when characters such as the Black Cat, Patsy Walker, and Señorita Rio are analyzed.
Comic Book Women offers a feminist history of the golden age of comics, revising our understanding of how numerous genres emerged and upending narratives of how male auteurs built their careers. Considering issues of race, gender, and sexuality, the authors examine crime, horror, jungle, romance, science fiction, superhero, and Western comics to unpack the cultural and industrial consequences of how women were represented across a wide range of titles by publishers like DC, Timely, Fiction House, and others. This revisionist history reclaims the forgotten work done by women in the comics industry and reinserts female creators and characters into the canon of comics history.” 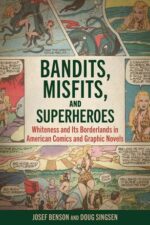 Bandits, Misfits, and Superheroes:
Whiteness and Its Borderlands in American Comics and Graphic Novels

“American comics from the start have reflected the white supremacist culture out of which they arose. Superheroes and comic books in general are products of whiteness, and both signal and hide its presence. Even when comics creators and publishers sought to advance an antiracist agenda, their attempts were often undermined by a lack of awareness of their own whiteness and the ideological baggage that goes along with it. Even the most celebrated figures of the industry, such as Jerry Siegel and Joe Shuster, Jack Jackson, William Gaines, Stan Lee, Robert Crumb, Will Eisner, and Frank Miller, have not been able to distance themselves from the problematic racism embedded in their narratives despite their intentions or explanations.
Bandits, Misfits, and Superheroes: Whiteness and Its Borderlands in American Comics and Graphic Novels provides a sober assessment of these creators and their role in perpetuating racism throughout the history of comics. Josef Benson and Doug Singsen identify how whiteness has been defined, transformed, and occasionally undermined over the course of eighty years in comics and in many genres, including westerns, horror, crime, funny animal, underground comix, autobiography, literary fiction, and historical fiction. This exciting and groundbreaking book assesses industry giants, highlights some of the most important episodes in American comic book history, and demonstrates how they relate to one another and form a larger pattern, in unexpected and surprising ways.” 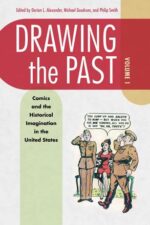 Drawing the Past, Volume 1:
Comics and the Historical Imagination in the United States*

“History has always been a matter of arranging evidence into a narrative, but the public debate over the meanings we attach to a given history can seem particularly acute in our current age. Like all artistic mediums, comics possess the power to mold history into shapes that serve its prospective audience and creator both. It makes sense, then, that history, no stranger to the creation of hagiographies, particularly in the service of nationalism and other political ideologies, is so easily summoned to the panelled page. Comics, like statues, museums, and other vehicles for historical narrative, make both monsters and heroes of men while fueling combative beliefs in personal versions of United States history.
Drawing the Past, Volume 1: Comics and the Historical Imagination in the United States, the first book in a two-volume series, provides a map of current approaches to comics and their engagement with historical representation. The first section of the book on history and form explores the existence, shape, and influence of comics as a medium. The second section concerns the question of trauma, understood both as individual traumas that can shape the relationship between the narrator and object, and historical traumas that invite a reassessment of existing social, economic, and cultural assumptions. The final section on mythic histories delves into ways in which comics add to the mythology of the US.” 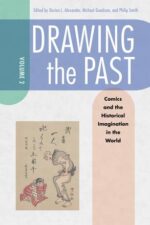 Drawing the Past, Volume 2:
Comics and the Historical Imagination in the World*

“In Drawing the Past, Volume 2: Comics and the Historical Imagination in the World, contributors seek to examine the many ways in which history worldwide has been explored and (re)represented through comics and how history is a complex construction of imagination, reality, and manipulation. Through a close analysis of such works as V for Vendetta, Maus, and Persepolis, this volume contends that comics are a form of mediation between sources (both primary and secondary) and the reader. Historical comics are not drawn from memory but offer a nonliteral interpretation of an object (re)constructed in the creator’s mind. Indeed, when it comes to history, stretching the limits of the imagination only serves to aid in our understanding of the past and, through that understanding, shape ourselves and our futures.
This volume, the second in a two-volume series, is divided into three sections: History and Form, Historical Trauma, and Mythic Histories. The first section considers the relationship between history and the comic book form. The second section engages academic scholarship on comics that has recurring interest in the representation of war and trauma. The final section looks at mythic histories that consciously play with events that did not occur but nonetheless inflect our understanding of history. Contributors to the volume also explore questions of diversity and relationality, addressing differences between nations and the cultural, historical, and economic threads that bind them together, however loosely, and however much those bonds might chafe.”