Contagious Imagination: The Work and Art of Lynda Barry

“Lynda Barry (b. 1956) is best known for her distinctive style and unique voice, first popularized in her underground weekly comic Ernie Pook’s Comeek. Since then, she has published prolifically, including numerous comics, illustrated novels, and nonfiction books exploring the creative process. Barry’s work is genre- and form-bending, often using collage to create what she calls “word with drawing” vignettes. Her art, imaginative and self-reflective, allows her to discuss gender, race, relationships, memory, and her personal, everyday lived experience. It is through this experience that Barry examines the creative process and offers to readers ways to record and examine their own lives.
The essays in Contagious Imagination: The Work and Art of Lynda Barry, edited by Jane Tolmie, study the pedagogy of Barry’s work and its application academically and practically. Examining Barry’s career and work from the point of view of research-creation, Contagious Imagination applies Barry’s unique mixture of teaching, art, learning, and creativity to the very form of the volume, exploring Barry’s imaginative praxis and offering readers their own.
With a foreword by Frederick Luis Aldama and an afterword by Glenn Willmott, this volume explores the impact of Barry’s work in and out of the classroom. Divided into four sections—Teaching and Learning, which focuses on critical pedagogy; Comics and Autobiography, which targets various practices of rememorying; Cruddy, a self-explanatory category that offers two extraordinary critical interventions into Barry criticism around a challenging text; and Research-Creation, which offers two creative, synthetic artistic pieces that embody and enact Barry’s own mixed academic and creative investments—this book offers numerous inroads into Barry’s idiosyncratic imagination and what it can teach us about ourselves.” 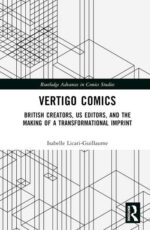 Vertigo Comics: British Creators, US Editors, and the Making of a Transformational Imprint

“This book explores the so-called “British Invasion” of DC Comics’ Vertigo imprint, which played an important role in redefining the mainstream comics industry in the US during the early 1990s.
Focusing on British creators within Vertigo, this study traces the evolution of the line from its creation in 1993 to its demise in 2019. Through an approach grounded in cultural history, the book disentangles the imprint’s complex roots, showing how editors channelled the potential of its British writers at a time of deep-seated economic and cultural change within the comics industry, and promoted a sense of cohesion across titles that defied categories. The author also delves into lesser-known aspects of the Invasion, exploring less-canonical periods and creators that are often eclipsed by Vertigo’s early star writers.
An innovative contribution on a key element of comic book history, this volume will appeal both to researchers of Vertigo scholarship and to fans of the imprint. It will also be an essential read for those interested in transatlantic collaborations and exchanges in the entertainment industry, processes of cultural legitimation and cultural hierarchies, and to anyone working on the representation of national and social identities.” 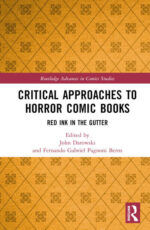 “This volume explores how horror comic books have negotiated with the social and cultural anxieties framing a specific era and geographical space.
Paying attention to academic gaps in comics’ scholarship, these chapters engage with the study of comics from varying interdisciplinary perspectives, such as Marxism; posthumanism; and theories of adaptation, sociology, existentialism, and psychology. Without neglecting the classical era, the book presents case studies ranging from the mainstream comics to the independents, simultaneously offering new critical insights on zones of vacancy within the study of horror comic books while examining a global selection of horror comics from countries such as India (City of Sorrows), France (Zombillénium), Spain (Creepy), Italy (Dylan Dog), and Japan (Tanabe Gou’s Manga Adaptations of H.P. Lovecraft), as well as the United States.
One of the first books centered exclusively on close readings of an under-studied field, this collection will have an appeal to scholars and students of horror comics studies, visual rhetoric, philosophy, sociology, media studies, pop culture, and film studies. It will also appeal to anyone interested in comic books in general and to those interested in investigating intricacies of the horror genre.” 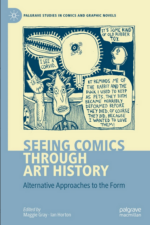 Seeing Comics through Art History: Alternative Approaches to the Form

“This book explores what the methodologies of Art History might offer Comics Studies, in terms of addressing overlooked aspects of aesthetics, form, materiality, perception and visual style. As well as considering what Art History proposes of comic scholarship, including the questioning of some of its deep-rooted categories and procedures, it also appraises what comics and Comics Studies afford and ask of Art History. This book draws together the work of international scholars applying art-historical methodologies to the study of a range of comic strips, books, cartoons, graphic novels and manga, who, as well as being researchers, are also educators, artists, designers, curators, producers, librarians, editors, and writers, with some undertaking practice-based research. Many are trained art historians, but others come from, have migrated into, or straddle other disciplines, such as Comparative Literature, American Literature, Cultural Studies, Visual Studies, and a range of subjects within Art & Design practice.” 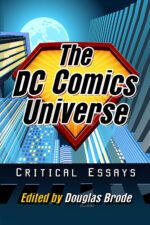 “As properties of DC comics continue to sprout over the years, narratives that were once kept sacrosanct now spill over into one another, synergizing into one bona fide creative Universe. Intended for both professional pop culture researchers and general interest readers, this collection of essays covers DC Universe multimedia, including graphic novels, video games, movies and TV shows. Each essay is written by a recognized pop culture expert offering a distinct perspective on a wide variety of topics. Even though many of the entries address important social themes like gender and racism, the book is not limited to these topics. Also included are more lighthearted essays for full verisimilitude, including analyses of long forgotten or seemingly marginal aspects of the DC Extended Universe, as well as in-depth and original interpretations of the most beloved characters and their relationships to one another. Highly accessible and approachable, this work provides previously unavailable in-roads that create a richer comprehension of the ever-expanding DC Universe.”