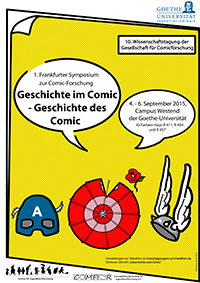 Directly to the registration

As the title indicates, the contributions and discussions of the conference will focus on comics and graphic literature with a double perspective: One field of interest will consist of the historical topics and subjects, ranging from antiquity to contemporary history, that are depicted in works of sequential art from all over the world and attract the attention of a broad readership. Contributing considerably to an international archive of cultural memory, comics play an important role in academic research as both historical source material and as depictions and interpretations of historical events. This provides a fertile ground for interdisciplinary research that combines approaches from academic disciplines such as literature, art, media, and cultural studies and history in particular.
Another field of interest – closely linked to and in correspondence with the aspects mentioned above – consists of the historicisation of the phenomenon ‘comic’, its contemporary varieties and its readership(s) as well as the analysis of its international developments. Focusing on history and the historical in picture stories, it is adequate and relevant to ask about the lines of tradition of the medium and their preconditions: not least since the debates on new (or seemingly new) trends such as manga and graphic novel, seriality, media culture, the relation of comics and picture books, comics in traditional and modern media, etc. raise questions on the nature of graphic literature.

Program of the Conference

please use the form attached and send it to
comictagung@rz.uni-frankfurt.de, subject: „history in Comics”