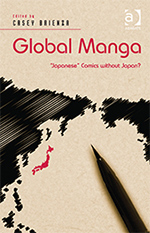 Casey Brienza (ed.)
Ashgate
224 pages
ISBN: 978-1-4724-3543-9
~£ 54.00
July 2015
Publisher’s page
Outside Japan, the term ‘manga’ usually refers to comics originally published in Japan. Yet nowadays many publications labelled ‘manga’ are not translations of Japanese works but rather have been wholly conceived and created elsewhere. These comics, although often derided and dismissed as ‘fake manga’, represent an important but understudied global cultural phenomenon which, controversially, may even point to a future of ‘Japanese’ comics without Japan.
This book takes seriously the political economy and cultural production of this so-called ‘global manga’ produced throughout the Americas, Europe, and Asia and explores the conditions under which it arises and flourishes; what counts as ‘manga’ and who gets to decide; the implications of global manga for contemporary economies of cultural and creative labour; the ways in which it is shaped by or mixes with local cultural forms and contexts; and, ultimately, what it means for manga to be ‘authentically’ Japanese in the first place. 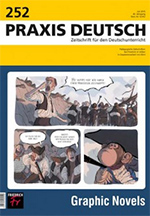 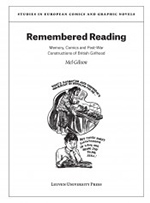 Mel Gibson
Leuven University Press
224 pages
ISBN 978-9-4627-0030-7
~€ 55,00
June 2015
Publisher’s page
Girls’ comics were a major genre from the 1950s onwards in Britain. The most popular titles sold between 800,000 and a million copies a week. However, this genre was slowly replaced by magazines which now dominate publishing for girls. Remembered Reading is a readers’ history which explores the genre, and memories of those comics, looking at how and why this rich history has been forgotten. The research is based around both analysis of what the titles contained and interviews with women about their childhood comic reading. In addition, it also looks at the other comic books that British girls engaged with, including humour comics and superhero titles. In doing so it looks at intersections of class, girlhood, and genre, and puts comic reading into historical, cultural, and educational context. 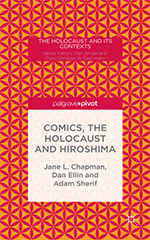 Comics, the Holocaust and Hiroshima

Jane L. Chapman, Dan Ellin and Adam Sherif
Palgrave MacMillan
ISBN 978-1-1374-0723-8
~£ 45.00
June 2015
Publisher’s page
Comics, the Holocaust and Hiroshima breaks new ground by arguing that comics have a dual role as sources of cataclysm between 1939 and 1945. First for historians to gauge awareness of the Holocaust and second through close analysis, of Paroles d’Etoiles in Vichy France and Barefoot Gen in Hiroshima, as testimonies of childhood emotions, experiences and memories. Calling for an extension of the range of source material relating to persecution, genocide and the atomic bomb from 1939 to 1945, comics are posited as an agent to build on the scholarship of new cultural history, historiography, memory and trauma studies. These fields connect through the shared ground of cultural record, which can be either deliberate/explicit or incidental reference. The comics form is a flexible one with potential to explore the space between reality and representation, with visuals working as iconic translations while narrative structure relies on readers’ mental contribution. 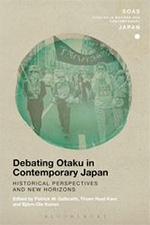 Patrick W. Galbraith, Thiam Huat Kam and Björn-Ole Kamm (Hg.)
Bloomsbury Academics
288 pages
ISBN 978-1-4725-9499-0
~$ 100.99
July 2015
Publisher’s page
Debating Otaku in Contemporary Japan disrupts the naturalization and trivialization of ‘otaku’ by examining the historical contingency of the term as a way to identify and contain problematic youth, consumers and fan cultures in Japan. Its chapters, many translated from Japanese and available in English for the first time – and with a foreword by Otsuka Eiji, former editor of Manga Burikko – explore key moments in the evolving discourse of ‘otaku’ in Japan. Rather than presenting a smooth, triumphant narrative of the transition of a subculture to the mainstream, the edited volume repositions ‘otaku’ in specific historical, social and economic contexts, providing new insights into the significance of the ‘otaku’ phenomenon in Japan and the world.
By going back to original Japanese documents, translating key contributions by Japanese scholars and offering sustained analysis of these documents and scholars, Debating Otaku in Contemporary Japan provides alternative histories of and approaches to ‘otaku’. For all students and scholars of contemporary Japan and the history of Japanese fan and consumer cultures, this volume will be a foundation for understanding how ‘otaku’, at different places and times and to different people, is meaningful. 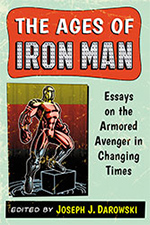 Joseph J. Darowski (ed.)
McFarland
236 pages
ISBN 978-0-7864-7842-2
~$ 40.00
July 2015
Publisher’s page
Billionaire industrialist, cold warrior, weapons designer, alcoholic, philanthropist, Avenger—Tony Stark, alter-ego of Marvel Comics’ Iron Man, has played many roles in his five decades as a superhero. From his 1963 comics debut in Tales of Suspense to the recent film adaptations—The Avengers (2012), Iron Man 3 (2013)—hundreds of creators have had a hand in writing the character with evolving depictions and distinct artistic styles. This collection of essays provides an historical overview of an important figure in American popular culture and a close reading of Iron Man’s most iconic story lines, including his origin in Vietnam, “Demon in a Bottle,” “Civil War,” and “Extremis.”