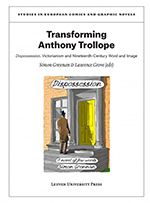 Simon Grennan and Laurence Grove (eds.)
Leuven University Press
264 pages
ISBN 978-9-4627-0041-3
~€ 55,00
August 2015
Publisher’s page
This volume is a cross-disciplinary collection of essays in the fields of nineteenth-century history, adaptation, word/image and Victorianism. Featuring new writing by some of the most influential, respected and radical scholars in these fields, Transforming Anthony Trollope constitutes both a close companion to Simon Grennan’s 2015 graphic novel Dispossession – an adaptation of Anthony Trollope’s 1879 novel John Caldigate – and a forward-looking, stand-alone addition to current debates on the cultural uses of history and the theorisation of remediation, illustration and narrative drawing.

Tilmann Altenberg and Ruth J. Owen (eds.)
Cardiff School of Modern Languages
110 pages
ISSN 1359-7485
Fall 2015
Publisher’s page
The articles in this themed issue are indicative not only of the complexity of the medium and the myriad issues involved in translating comics, but also of the diversity of angles from which comics translation can be studied. […] There is no single history of comics translation, but rather many national and formal and thematic histories. Rather than being lured into thinking that infinite generalisations can be made, we actually need to begin with small clusters of individual translations and that is what these articles do. The contributions here are case studies of specific acts of comics translation within clearly circumscribed cultural contexts.

Image&Narrative 16.2: The Narrative Functions of Photography in Comics

Jan Baetens, Anneleen Masschelein and Hilde Van Gelder (eds.)
Open Humanities Press
139 pages
ISSN 1780-678X
Fall 2015
Publisher’s page
This collection of essay brings together articles that examine the comingling of cartoon and photographic images. In this special volume of Image & Narrative, a peer-reviewed e-journal on visual narratology and word and image studies, contributors ask what narrative functions photographs fulfill when included in a comics universe. They do so to begin challenging overarching conclusions about a narrative medium (comics) and a visual mode of representation (cartooning or photography). 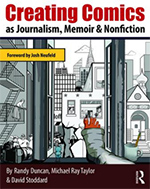 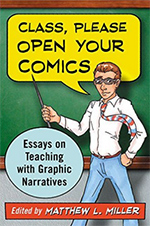 Matthew L. Miller (ed.)
McFarland
284 pages
ISBN 978-0-7864-9514-6
~$ 40,00
April 2015
Publisher’s page
Comics and sequential art are increasingly in use in college classrooms. Multimodal, multimedia and often collaborative, the graphic narrative format has entered all kinds of subject areas and its potential as a teaching tool is still being realized. This collection of new essays presents best practices for using comics in various educational settings, beginning with the basics. Contributors explain the need for teachers to embrace graphic novels. Multimodal composition is demonstrated by the use of comics. Strategies are offered for teachers who have struggled with weak visual literacy skills among students. Student-generated comics are discussed with several examples. The teaching of postmodern theories and practices through comics is covered. An appendix features assignment sheets so teachers can jump right in with proven exercises. 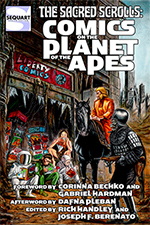 The Sacred Scrolls:
Comics on the Planet of the Apes

Rich Handley and Joseph F. Berenato (eds.)
Sequart
312 pages
ISBN 978-1-9405-8911-4
~$ 16,99
August 2015
Publisher’s page
Since the 1970s, the Planet of the Apes franchise has frequently delved into the world of comic books. Some stories have made the Lawgiver proud, while others have brought shame to Ape City. In the comics arena, not all apes are created equal — but for fans, that’s half the fun of reading them. More than 150 POTA comics have been published during the past four decades, from Gold Key, Marvel Comics, Power Records, Brown Watson Books, Editorial Mo.Pa.Sa., Malibu Graphics, Dark Horse, Mr. Comics, and BOOM! Studios. […] Sacred Scrolls: Comics on the Planet of the Apes will examine the entire history of POTA comic books, from Gold Key to BOOM! and everything in between. This anthology will feature insightful, analytical essays about the franchise’s four-color continuation, from popular comic historians, novelists, bloggers and subject-matter experts.