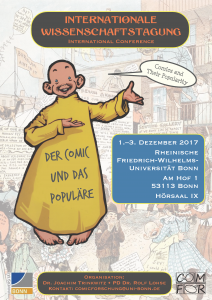 The University of Bonn warmly invites to the 12th annual research conference of the German Society for Comics Studies (ComFor) from December 1 to 3, 2017: “Comics and their Popularity”. It is organized by Joachim Trinkwitz and Rolf Lohse.

Visitors are kindly requested to register at comicforschung@uni-bonn.de. The conference fee will be 30 € for guests (ComFor-members pay a reduced fee of 20€ and students 10 €). Please transfer to:

“Comics might currently seem to show some ambivalence towards their own popularity. On the one hand, multitudes have access to these media that provide entertainment and, increasingly, information. On the other hand, it is their very popularity that has in the past given rise to popular suspicions against comics. It is no later than in the 1950s that parents and pedagogues all over the world begin to fear that comics might lead children and teenagers astray, prompting them to limit access, which has in turn constrained the formal and topical development of the art form. At the same time, rendering comics as harmless entertainment for kids attracted criticism of immaturity, excluding it from the canonical reading for self-defined members of the educated classes. In the 1970s, the art form could thus be rediscovered as a subversive mode of expression. The attempt to use the term ‘graphic novel’ as a vehicle to approach new audiences was again met with ambivalence: While the traditional fan scene, often wary of outsiders, saw its identity and large parts of its reading conventions at risk, publishers, reviewers and book sellers saw an opportunity to gain new readership and popularity. For some parts of academia, it was only then that comics became an object of cultural research. It is these dialectics of exclusions and inclusions, access and constraint, that the conference on Comics and their Popularity at Bonn University will discuss. ”

Read all the abstracts (PDF)