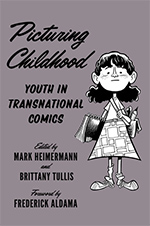 Publisher’s page
Comics and childhood have had a richly intertwined history for nearly a century. From Richard Outcault’s Yellow Kid, Winsor McCay’s Little Nemo, and Harold Gray’s Little Orphan Annie to Hergé’s Tintin (Belgium), José Escobar’s Zipi and Zape (Spain), and Wilhelm Busch’s Max and Moritz (Germany), iconic child characters have given both kids and adults not only hours of entertainment but also an important vehicle for exploring children’s lives and the sometimes challenging realities that surround them. Bringing together comic studies and childhood studies, this pioneering collection of essays provides the first wide-ranging account of how children and childhood, as well as the larger cultural forces behind their representations, have been depicted in comics from the 1930s to the present. The authors address issues such as how comics reflect a spectrum of cultural values concerning children, sometimes even resisting dominant cultural constructions of childhood; how sensitive social issues, such as racial discrimination or the construction and enforcement of gender roles, can be explored in comics through the use of child characters; and the ways in which comics use children as metaphors for other issues or concerns. Specific topics discussed in the book include diversity and inclusiveness in Little Audrey comics of the 1950s and 1960s, the fetishization of adolescent girls in Japanese manga, the use of children to build national unity in Finnish wartime comics, and how the animal/child hybrids in Sweet Tooth act as a metaphor for commodification. 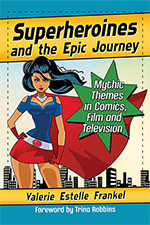 Superheroines and the Epic Journey:
Mythic Themes in Comics, Film and Television

Publisher’s page
The heroine’s journey echoes throughout ancient legend. Each young woman combats her dark side and emerges stronger. This quest is also a staple of American comic books. Wonder Woman with semi-divine powers gives us a new female-centered creation story. Batgirl, Batwoman and Black Widow discover their enemy is the dark mother or shadow twin, with the savagery they’ve rejected in themselves. Supergirl similarly struggles but keeps harmony with her sister. From Jessica Jones and Catwoman to the new superwomen of cutting-edge webcomics, each heroine must go into the dark, to become not a warrior but a savior. Women like Captain Marvel and Storm sacrifice all to join the ranks of superheroes, while their feminine powers and dazzling costumes reflect the most ancient tales. 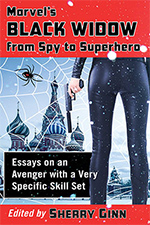 Publisher’s page
First appearing in Marvel Comics in the 1960s, Natasha Romanoff, a.k.a. Black Widow, was introduced to movie audiences in Iron Man 2 (2010). Her character has grown in popularity with subsequent Marvel films, and fans have been vocal about wanting to see Black Widow in a titular role. Romanoff has potent appeal: a strong female character who is not defined by her looks or her romantic relationships, with the skill set of a veteran spy first for the KGB, then for S.H.I.E.L.D. This collection of new essays is the first to examine Black Widow and her development, from Cold War era comics to the Marvel Cinematic Universe. 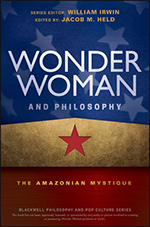 Publisher’s page
Wonder Woman and Philosophy: The Amazonian Mystique explores a wide range of philosophical questions surrounding the most popular female superhero of all time, from her creation as feminist propaganda during World War II up to the first female lead in the blockbuster DC movie-franchise: The first book dedicated to the philosophical questions raised by the complex and enduringly iconic super-heroine; Fighting fascism with feminism since 1941, considers the power of Wonder Woman as an exploration of gender identity and also that of the human condition – what limits us and what we can overcome; Confronts the ambiguities of Wonder Woman, from her roles as a feminist cause and fully empowered woman, to her objectification as sexual fantasy; Topics explored include origin stories and identity, propaganda and art, altruism and the ethics of care, Amazonians as transhumanists, eroticism and graphic novels, the crafting of a heroine, domination, relationships, the ethics of killing and torture, and many more. 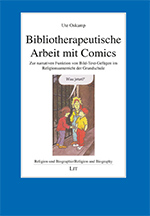 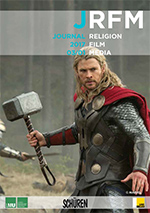 Publisher’s page
The comic transcends the merely entertaining, and fans of comics become engaged and invested in the field through a range of activities. Major cities host regular comic conventions, attracting hundreds of thousands of attendees each year, who search for special issues of their favourite comic-book series, meet artists, attend workshops and buy merchandise. Many fans do not stop at just attending conventions; they do so dressed as their favourite comic characters or wearing badges, buttons, T-shirts or sweaters with images of those characters on them. In other words: many fans do ot merely consume comic books; rather, they arrange a considerable part of their lives around them and in some cases even embody their heroes, that is, they copy their behaviour and their language. The comic universe, the comic books and the range of activities emerging out of them and around them become a meaningful universe for fans.