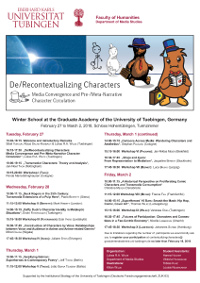 The conference takes place in the Turmzimmer of Castle Hohentuebingen. Due to limitations regarding the number of participants we would kindly ask you to register your participation at contextualizingcharacters (ät) graduiertenakademie.uni-tuebingen.de.
The conference is supported by the Institutional Strategy of the University of Tübingen (Deutsche Forschungsgemeinschaft, ZUK 63).

“Characters are essential for what is discussed as ‘media convergence’. This term, usually attributed to Henry JENKINS (2006), addresses two interconnected dynamics: on the one hand the expansion of narrative works and worlds by means of different media forms and platforms; on the other, participatory practices related to the creation of user-generated content. Characters can not only be considered the ‘currency’ of and between different forms of media, as Rainer LESCHKE found (2010: 11). In many cases, they also serve as a kind of ‘fuel’, as an incentive for both dynamics mentioned above. Marc STEINBERG, in his historically-oriented media studies survey of Japanese character marketing, considered a character consequently as “an entity that … both supports the transmedia movement and environmental diffusion … and refuses to be pinned down in any one medial incarnation“ (2012: 44).

It is not surprising, then, that many character theories in recent years are essentially thought of as transmedial: applicable to representations of characters through a variety of media (e.g. film, television, comics, video games, etc.). In most cases, however, such theories – often emerging close to what is understood as a ‘transmedial narratology’ (cf. THON 2016) – specifically limit themselves to narrative media: media artefacts which offer representations of a storyworld, of a diegesis. Consequently, characters are often considered “first and foremost elements of the constructed narrative world” (EDER, JANNIDIS, SCHNEIDER 2010: 9) or as “non-actual but well-specified individual presumed to exist in some hypothetical, fictional domain” (MARGOLIN 2007: 66). The Winter School “De/Recontextualizing Characters” proposes taking a closer look at a variety of transmedia ‘characters’ (or rather: of their utilization) which cannot be accounted for if they are primarily understood through the ‘lens’ of represented (and especially fictional) worlds. As a heuristic starting point, two related domains may be distinguished: ‘pre-narrative’ and ‘meta-narrative’ characters (or, maybe, their mode of circulation).

Pre-narrative characters seem to share the common trait of existing in denial of any ‘mandated’ narratives, official stories, or fictional worlds surrounding. In this perspective, one might reconsider examples such as ‘virtual idols’ or ‘fictional celebrities’ like “Hatsune Miku”; corporate icons like LINE’s “Cony” or “Brown the Bear”; or mascots and ‘communicational characters’ like the Deutsche Bahn’s “Max Maulwurf” or Paris RATP’s “Serge the Rabbit”. Further examples are fictitious beings that are invented for nothing but toys and material objects to play with, such as Mattel’s “Barbie” Doll or Takara’s “Licca-chan”; and, finally, ‘pure’ product placement figures such as Sanrio’s “Hello Kitty” or Thomas GOLETZ’ “Diddl Maus” which circulate on clothes, coffee mugs, and office supplies. Some can be seen as ‘mediated performers’ more than anything (cf. MAYNARD 2015): fictitious actors that can take on any fictional role attributed to them. Often, these attributions take place within collaborative networks and participatory cultures of social networking services, in fan fiction, artworks, or cosplay. They can be enacted and performed.

While the media artefacts they are circulating on/in might not be described as ‘narrative’, they are nevertheless not accurately addressed without any account of imaginative ‘make-believe’. STEINBERG argued that “[a]s children stickered their surroundings with the image of Atomu [Astro Boy], they incorporated or transposed an Atomu world into their environment“ (2012: 81). Accordingly, a pre-narrative character use is intended to ‘overlay’ the actual environment of their material representation (cf. DETERDING 2016). Japanese theorists offer a helpful conceptual distinction between kyarakutā (character): a fictitious being represented to exist in a storyworld-context; and kyara: “A highly stylized or simplified visual figuration that can be easily reproduced and consumed outside of its original context” (GALBRAITH 2009: 125). In a somewhat similar vein, Shane DENSON and Ruth MAYER established the distinction between ‘series characters’ (Serienfiguren) and ‘serial figures’ (serielle Figuren), the latter circulating (and ‘existing’, culturally) outside of specific narrative contexts. However, they emerge only as a synthesis or a ‘cultural myth’ based on a series of narrative representations. A kyara, in contrast, is thought to be a more fundamental phenomenon. It can gain a cultural existence ‘on its own’, even if there is no single ‘workworld’ to begin with.

Although media franchises that are “explicitly designed to allow for user-level reshuffling and reenactment“ (ITO 2008, 404) might be more typical for Japanese cases of media convergence (‘media mix’), a variety of historically oriented media studies have shown that ‘storyworld’-related notions of transmedia characters might be rather limited in any case. Paolo BERTETTI, for instance, argued that a “world-centred logic [of characters] is typical of the more recent transmedia productions, to which – not surprisingly – JENKINS (2006) only refers“ (2014: 17) and that “[w]e could say that older forms of transmedia franchises were constructed on character sharing rather than on the logics of a particular world“ (ibid.). JENKINS himself conceded that a ‘modern’ transmedia character (“who carries with him or her the timeline and the world depicted on the ‘mother ship’, the primary work which anchors the franchise“, 2009: n.pag) should be somehow distinguished from protagonists of earlier animated cartoons, such as Felix the Cat (“a character who is extracted from any specific narrative context“, ibid.).

The Walt Disney studios are well-known for using characters such as Mickey, Donald, or Goofy transfictionally, as if they could take on character-roles in any narrative context – just as if they, too, had “a body produced (that of the character) and a body producing (that of the actor)“ (STEINBERG 2012: 68). In Disneyland theme-parks, performers in full-body suits arguably do not represent Micky or Donald as contextualized fictitious beings, but rather as fictitious actors play-acting those specific roles. Similarly, their illicit détournement is certainly most saliently discussed with respect to the Japanese participatory cultures; but it is significant for US-American comic book history as well. One just has to think of the decontextualization of protagonists in underground comix or subversive ‘Tijuana Bibles’. Christina MEYER pointed out (2016) that the first American comic book ‘celebrity’, Richard F. OUTCAULT’s “Yellow Kid”, was not only a ‘series characters’, but also deeply rooted within illicit practices of theater show producers, sheet music composers, publishers, toy manufacturing companies, and advertisers. In short, popular characters quite often “live a reality outside the text” (FREITAS CARDOSO/DOS SANTOS 2015: 550) – especially if their representations are iconic and easy to ‘emulate’. NOZAWA Shunsuke consequently noted that “[a]nimated characters do not simply ‘move’ on a screen; they must be able to move out of the frame, and enter into other media forms and other narrative contexts. […] Characters’ life is maintained through processes of ‘decontextualization’ and ‘recontextualization’” (2013: n.pag).

If characters without stories (kyara) could thus be considered ‘pre- or proto-narrative’, as manga critic ITŌ Gō coined it, they essentially function as ‘hubs’, interfaces, or intersections for diverging ‘games of make-believe’. These games, in turn, are often forms of a narrative, aesthetic, medial, or social recontextualization.

Consequently, every kyara could also be addressed as a transfictional “meta-narrative nodal point” (AZUMA 2007: 125): they can easily be placed back into heterogeneous narrative contexts (as a contingent kyarakutā). Some questions, which have rarely been discussed in connection, emerge as key issues to all these circulations. The Winter School “De/Recontextualizing Characters” intends to investigate from an intercultural and interdisciplinary perspective: What medial (material, institutional, and semiotic) affordances and constraints are relevant or even necessary for the de/recontextualization of characters within convergence cultures? What medial (material, institutional, semiotic, and maybe even affective) ‘characteristics’ are needed in order to identify a given representation as ‘the same kyara‘ – but not necessarily as the identical kyarakutā? And, conversely, what sociocultural functions and uses are connected to these circulations through – and especially outside of – narrative contexts? In other words: how do social and cultural contexts shape the de/recontextualization of characters – and vice versa?”