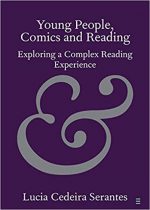 „Scholars and professionals interested in the study and engagement with young people will find this project relevant to deepening their understanding of reading practices with comics and graphic novels. Comics reading has been an understudied experience despite its potential to enrich our exploration of reading in our currently saturated media landscape. This Element is based on seventeen in-depth interviews with teens and young adults who describe themselves as readers of comics for pleasure. These interviews provide insights about how comics reading evolves with the readers and what they consider a good or bad reading experience. Special attention is paid to the place of female readers in the comics community and material aspects of reading. From these readers, one begins to understand why comics reading is something that young people do not ‚grow out of‘ but an experience that they ‚grow with‘.“ 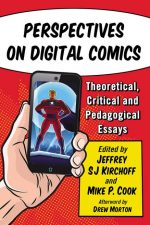 „This collection of new essays explores various ways of reading, interpreting and using digital comics. Contributors discuss comics made specifically for web consumption, and also digital reproductions of print-comics. Written for those who may not be familiar with digital comics or digital comic scholarship, the essays cover perspectives on reading, criticism and analysis of specific titles, the global reach of digital comics, and how they can be used in educational settings.“ 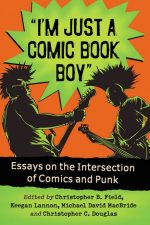 “I’m Just a Comic Book Boy”: Essays on the Intersection of Comics and Punk

„Comics and the punk movement are inextricably linked—each has a foundational do-it-yourself ethos and a nonconformist spirit defiant of authority. This collection of new essays provides for the first time a thorough analysis of the intersections between comics and punk. The contributors expand the discussion beyond the familiar U.S. and UK scenes to include the influence punk has had on comics produced in other countries, such as Spain and Turkey.“ 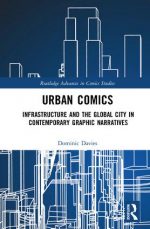 „Urban Comics: Infrastructure and the Global City in Contemporary Graphic Narratives makes an important and timely contribution both to comics studies and urban studies, offering a decolonisation and reconfiguration of both of these already interdisciplinary fields. With chapter-length discussions of comics from cities such as Cairo, Cape Town, New Orleans, Delhi and Beirut, this book shows how artistic collectives and urban social movements working across the global South are producing some of the most exciting and formally innovative graphic narratives of the contemporary moment.
Throughout, the author reads an expansive range of graphic narratives through the vocabulary of urban studies to argue that these formal innovations should be thought of as a kind of infrastructure. This ‘infrastructural form’ allows urban comics to reveal that the built environments of our cities are not static, banal, or depoliticised, but rather highly charged material spaces that allow some forms of social life to exist while also prohibiting others. Built from a formal infrastructure of grids, gutters and panels, and capable of volumetric, multi-scalar perspectives, this book shows how urban comics are able to represent, repair and even rebuild contemporary global cities toward more socially just and sustainable ends.
Operating at the intersection of comics studies and urban studies, and offering large global surveys alongside close textual and visual analyses, this book explores and opens up the fascinating relationship between comics and graphic narratives, on the one hand, and cities and urban spaces, on the other.“

„Entertaining Comics Group (EC Comics) is perhaps best-known today for lurid horror comics like Tales from the Crypt and for a publication that long outlived the company’s other titles, Mad magazine. But during its heyday in the early 1950s, EC was also an early innovator in another genre of comics: the so-called “preachies,” socially conscious stories that boldly challenged the conservatism and conformity of Eisenhower-era America.
EC Comics examines a selection of these works—sensationally-titled comics such as “Hate!,” “The Guilty!,” and “Judgment Day!”—and explores how they grappled with the civil rights struggle, antisemitism, and other forms of prejudice in America. Putting these socially aware stories into conversation with EC’s better-known horror stories, Qiana Whitted discovers surprising similarities between their narrative, aesthetic, and marketing strategies. She also recounts the controversy that these stories inspired and the central role they played in congressional hearings about offensive content in comics.
The first serious critical study of EC’s social issues comics, this book will give readers a greater appreciation of their legacy. They not only served to inspire future comics creators, but also introduced a generation of young readers to provocative ideas and progressive ideals that pointed the way to a better America.“